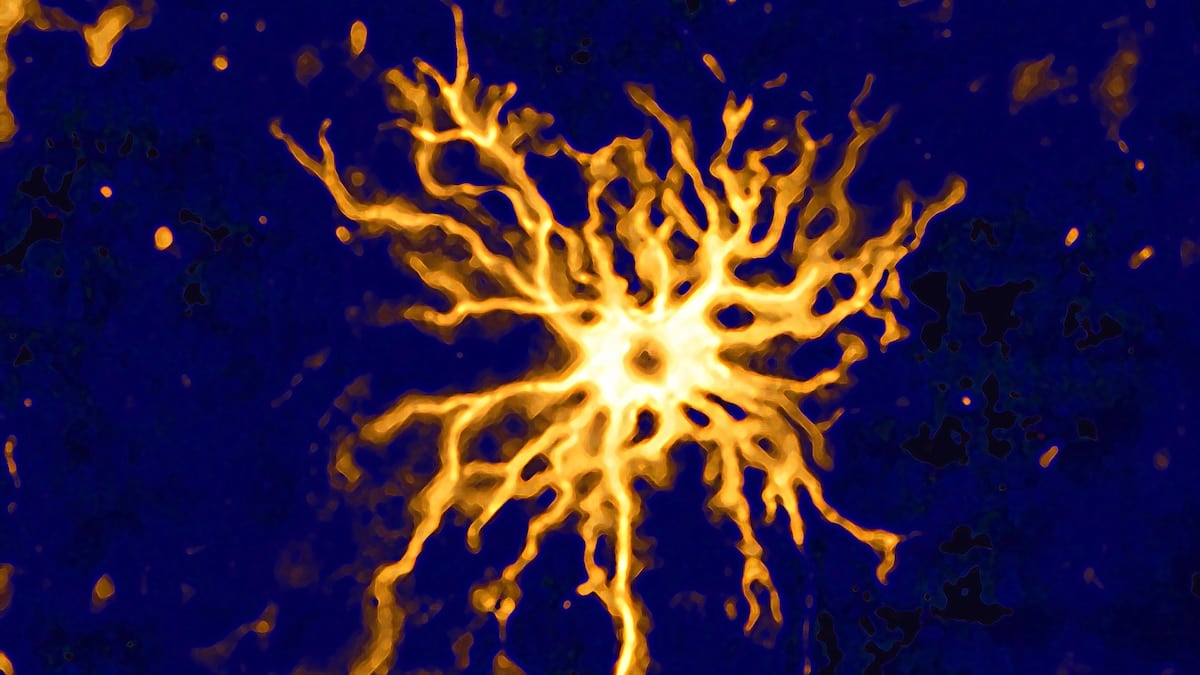 ScienceCoronavirus CoverageNearly 40 percent of long COVID patients suffer from the disorienting condition. Destroyed connections between brain cells may be to blame.

When scientists at the Karolinska Institute in Sweden infected brain organoids—pinhead-size bits of brain tissue grown in the lab—with the virus that causes COVID, they found that it accelerated the destruction of connections between neurons called synapses.

The discovery adds to the growing understanding of how SARS-CoV-2 enters the central nervous system and causes disease. In the last two years, scientists have documented long-lasting neural and behavioral problems in COVID-19 patients. One such condition, known as brain fog, causes disorientation, memory loss, chronic headache, and numbness, and it affects nearly 40 percent of long COVID patients.

Carl Sellgren, a psychiatrist and cellular biologist, and his team at the Karolinska Institute decided to use the organoids to try to learn what SARS-CoV-2 does to brain and whether it might help explain the neurological symptoms.

Their research has led them to conclude that destroying too many connections between neurons, or over-pruning, may be causing brain fog in long COVID patients. “This could be one of the many reasons—probably—why we are observing a range of neurological symptoms, even after the infection is long gone,” says Samudyata, a postdoctoral researcher at Karolinska Institute who led the study and goes by one name.

Ana Osório Oliveira, a co-author and neuroscientist in Sellgren’s lab, says, “It was quite striking that very small amounts of the virus could quite rapidly spread in the organoids and eliminate an excessive number of synapses.” The research was published in the journal Molecular Psychiatry.

“This study fits in nicely with ours and several others,” says Madeline Lancaster, a neurobiologist at MRC Laboratory of Molecular Biology, Cambridge, U.K. Using brain organoids, Lancaster’s research has revealed that SARS-CoV-2 damages the protective barrier of the brain. When this barrier is breached, pathogens, aberrant immune cells, and inflammatory compounds, can enter the cerebrospinal fluid and the brain.

Pruning connections between neurons is essential for learningThe brain is made of a dense and dynamic network of nerve cells that communicate through synapses that change as humans learn. “Synapses are essentially how cells talk to each other and how information is passed from one part of the brain to another,” Lancaster says.

Synapses are responsible for all the functions of the brain, from memory to controlling movement to feeling emotions—and they are constantly remodeled. “That’s how we learn,” she says.

The junctions between neurons that talk to each other frequently have more knob-shaped ends that produce neurotransmitters—chemicals that transmit signals to other neurons—which then travel across gaps between neurons known as a synaptic cleft. Conversely, neurons that that communicate less, or not at all, have fewer synapses because they are removed, or pruned, by immune cells called microglia. Microglia make up to 17 percent of the cell population in some parts of human brain and perform housekeeping duties by migrating through the brain eating dead cells and scavenging weak synapses.

Although synaptic pruning is most active in developing brains such as in fetuses and infants, it continues in healthy brains throughout life and is necessary for encoding new memories and erasing the ones the brain no longer needs. Synaptic pruning is also critical for the brain to recover from an injury; strengthening synapses as the lost skills are relearned and removing those that no longer function.

Using brain organoids to study neural damage Studying a direct link between COVID-19 and cognitive dysfunction, such as brain fog, is difficult in living brains. That is why studies are often limited to cadavers of COVID-19 patients. But brain organoids, called mini-brains, allow scientists to see in real time how SARS-CoV-2 affects living tissue.

Using brain organoids, Oliveira and her colleagues found that the virus itself was not directly pruning the synaptic connections but was activating the microglia.

“We found that following infection by SARS-CoV-2, somehow the microglia become immunoreactive, and eat more of the synapses than normal,” Samudyata says.

The study is important because it clearly shows the quantitative differences in the microglial activity after COVID-19 and its effect on synapses, says Ayush Batra, a neurologist at Northwestern University Feinberg School of Medicine.

But too much synapse pruning can be detrimental and has been linked to neurodevelopmental disorders such as schizophrenia, as well as neurodegenerative conditions such as Alzheimer’s and Parkinson’s diseases.

If the excessive elimination of synapses that occurs in brain organoids after SARS-CoV-2 infection also occurs in people, it may destroy vital connections and explain why some with COVID-19 suffer from long-term neurological symptoms.

“Too much synapse elimination would be expected to affect a person’s ability to form new memories, or to remember existing ones, and could help explain the sluggish brain functions seen in brain fog,” Lancaster says.

This is consistent with studies done at the U.S. National Institutes of Health that have found antibodies produced in response to SARS-CoV-2 can attack the cells lining the brain’s blood vessels, causing damage and inflammation—which activates microglia—even if the virus doesn’t directly enter the brain. That may explain why, as Batra’s team has shown, some  long COVID patients not sick enough to be hospitalized continue to experience neurologic symptoms beyond a year after initial infection.

Is the loss of synapses causing brain shrinkage?A U.K. study has also shown that even mild COVID-19 can shrink the brain through loss of gray matter—the outermost layer of the brain that is made up of cell bodies and is vital for controlling movement, memory, and emotions—causing physical changes equivalent to a decade of aging. “We are still unclear what may contribute, in general, to a loss of gray matter volume or thickness observed using MRI,” says Gwenaëlle Douaud, a neuroscientist at the University of Oxford who led the study.

While synapse elimination, as shown in Samudyata’s study, could account for a small percentage of the change in the gray matter, says Douaud, more studies combining imaging with tissue sections are required to determine the other factors that lead to brain shrinkage.

Hyperactive microglia may cause problems in other ways. The current study also shows that the pattern of genes turned on and off by the microglia in brain organoids after SARS-CoV-2 infection mimicked gene activity seen in neurodegenerative disorders. This may explain why there is a three times higher risk of developing neurological or psychiatric conditions within six months after COVID-19 compared with those who were not infected. In adults aged over 65, the risk of developing dementia after a COVID-19 infection is almost twice that from other respiratory infections.

However, scientists caution that much more research is needed to understand the effect of SARS-CoV-2 infection on the brain. As organoids resemble immature cells—like those in a fetal or post-natal state—this limits extrapolation of the results to mature adult brain cells.

“While these data are exciting and indicate a role for proinflammatory microglia in the disease mechanisms underlying long COVID, more studies are required to validate these findings and build on them,” says Oliver Harschnitz, group leader in the Neurogenomics Research Centre at Human Technopole Institute in Milan, Italy.

It’s also not known whether long COVID has irreversible effects on the brain. So as the pace of holiday and indoor winter activities picks up, Samudyata advises taking preventative measures and staying up to date on vaccinations to minimize the chance of getting COVID over and over. While it isn’t clear how the virus exerts detrimental effects on the brain, it’s evident that it does cause damage.

Alex Murdaugh sobs in front of surviving son who is on...

Huge asteroid the size of a London bus will fly within...

‘I trusted her’: Mom of Idaho victim slams lawyer for abandoning...

Morse Code is making a comeback! Children as young as FIVE...