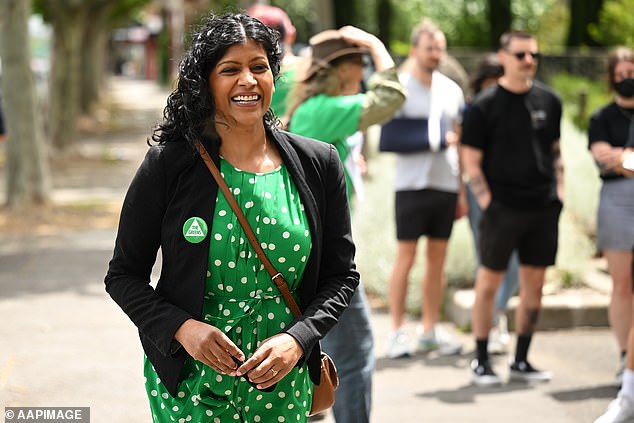 Jubilant Greens cheer for a ‘green slide’ in Melbourne as the leader of the left-wing party leads raucous celebrations, but they will NOT maintain the balance of power

The Greens are celebrating a ‘green slide’ from the Victorian election as the minor left-wing party wins at least two seats in Melbourne city centre.

Prime Minister Daniel Andrews was returned to power in Saturday’s election and voters handed him a historic third term in majority government.

But Greens leader Samantha Ratnam also had reason to celebrate: She told her supporters: “Melbourne is going green!!”

The party was projected to take the Northcote and Richmond seats and come forward in Pascoe Vale from 9:30pm, according to ABC figures.

They also retained the Brunswick, Melbourne and Prahran seats.

Ms Ratnam told supporters the “green slide continues”, a reference to the party winning a large number of seats in the federal election in May.

The Greens clung to three seats with Sam Hibbins winning in Prahran, Ellen Sandell, a mother of three, in Melbourne and Dr Tim Read in Brunswick.

But Gabrille de Veitri for the Greens has ousted Labor in the modern city of Richmond with newcomer Lauren O’Dwyer’s campaign fraught with questions about her Aboriginal heritage claim.

Archie’s ex nanny admits she compared herself to Prince William and...

Lebanese judge at the centre of Beirut blast inquiry showdown