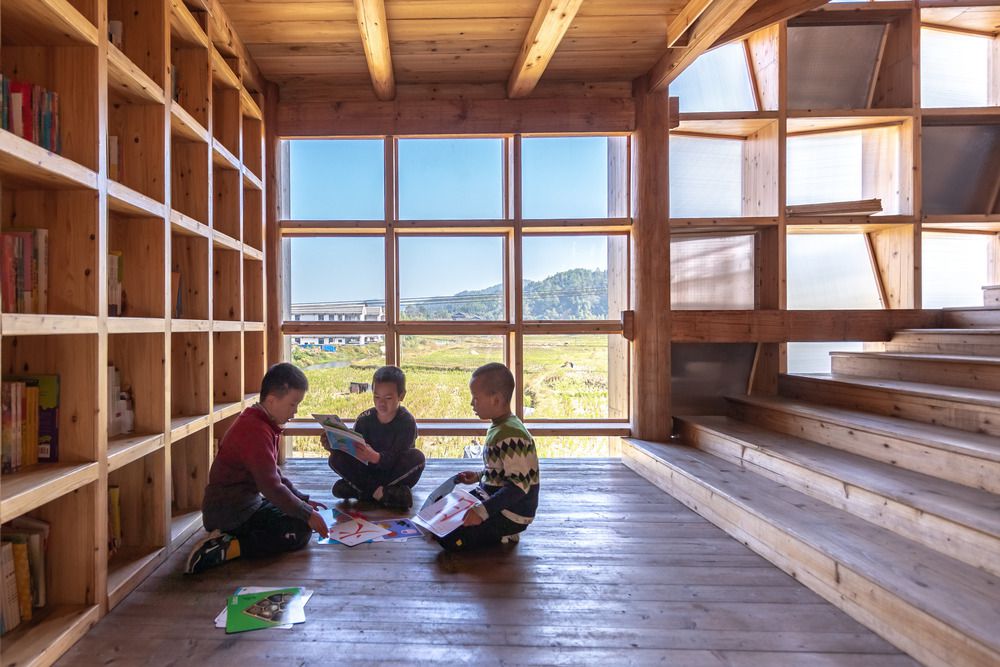 The Dong people’s skills with wood are put to use.

China’s southeastern provinces are home to an ethnic minority known for their skill with wood. Known as the Dong, this community builds without using nails and utilizes whole tree trunks to create earthquake-proof structures that have survived for centuries. Now, alternative architectural practice Condition_Lab has created a timber children’s library in rural China that pays homage to Dong architecture.

Called Pingtan Book House, the children’s library is a “new village library paradigm in China.” The firm, based in the Chinese University of Hong Kong (CUHK), described the structure in a statement: “Imagine a staircase that never ends, as an infinite loop of risers and treads squeezed into a traditional timber house. Adding to the mystery, the staircase has no destination, but rather is a destination itself. The walls of the house have been transformed into a matrix of bookshelves and windows overlooking a courtyard.”

Condition_Lab noted that the Dong people have seen the decline of their architectural heritage, eradicated by the arrival of foreign material: concrete. “Entire villages, built over centuries from a single sustainable material—indigenous China Fir—are rapidly losing their identity. Dong’s cultural DNA is being challenged by contemporary living and the quest to modernize.”

They have inserted a timber structure in the middle of a cluster of five ugly concrete buildings, using traditional materials and technologies, built with local carpenters and students from the CUHK.

“This remarkable achievement, seldom occurring in contemporary construction, embraces a Book House built entirely using a single material, with every element, including walls, stairs, and floors, built with timber,” said the firm. “The only ‘foreign’ material introduced was polycarbonate, used in façade panels that allow sunlight to filter in and provide external views. Construction followed traditional Dong carpentry details, where ‘Dragon Joints’ composed of male and female interlocking parts are used as the main structural bond.”

The architects suggest there are two lessons to be learned from this project. The first is where the children learn that their culture remains relevant and these skills with wood remain useful.

“The second lesson relates to the discipline itself, at a moment when architecture, particularly in urban metropolises like Hong Kong, appears to have lost its soul to ever-demanding developers,” said the firm. “That reality makes one aware of the social importance of architecture. Social impact does not require large amounts of financial investment, and design is not limited to high-end projects. To put it simply, architecture must have a purpose.”

But there is another lesson that becomes clear when you look at this photo essay, “Historic Architecture of the Dong People, China.” Their technology was so much more appropriate and sensible than the concrete that replaced it. Ignoring what we know now about how wood stores carbon dioxide while making concrete emits tons of it.

Concrete is heavy and stiff. In 2008, thousands of children were killed when “tofu schools” built with shoddy concrete and insufficient reinforcement collapsed in Sichuan. Light, flexible wood can be a lot safer, whether in southeast China or California.

Condition_Lab describes this project as “a timber structure that retains the Dong architectural DNA, and which could reawaken a sense of wonder in their heritage,” while also noting that “the design fosters a form of ‘living heritage’ to reconnect and inspire children, while allowing them to appreciate their precious culture via direct engagement.”

We can hope that the Dong architectural DNA replicates and spreads, pushing out the carbon-spewing concrete; this traditional wood construction tech is so much more interesting and sustainable. Watch the video and see how they put this together—it’s fascinating.

The one problem with all of these “stairs as chairs” buildings that have become popular over the last decade is they are not universally accessible. So while it would be lovely to see a revival of Dong architectural DNA, we can hope that it is adapted so that everyone can enjoy it.

Merry - January 27, 2023
A TikTok star has actually exposed the primary distinctions in between life in Australia and the U.S.A., sharing how the 2 nations have...

Special: Great deals of us still actually do not trust material...

Simu Liu flaunts his ripped abs as he goes to an...

Scarlett Johansson welcomes fans inside her early morning: She gets up at 6:30 am