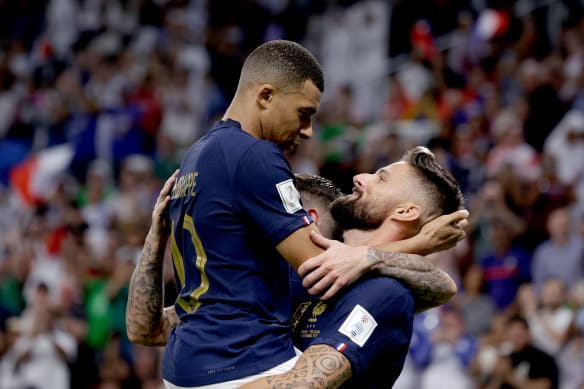 Doha: Olivier Giroud is now France’s all-time leading goalscorer, with his three goals so far at the World Cup in Qatar takes him to 52 for Qatar and surpasses the previous record held by Thierry Henry for 15 years.

It’s a nice little slice of history for a striker who has long been underappreciated, and was famously maligned by the fans of his former club, Arsenal, who couldn’t always see the impact he was having on games if he wasn’t scoring.

But deep down, he knows he needs to savour every single moment he holds it because it won’t be for long.

Kylian Mbappe will be there. For him, for them and for everything football.

“He is the best striker I have played with,” Giroud said.

“I know my records will be broken by him. He It is amazing. But, it is also scary that he is still learning. We have yet to see the best of Kylian. I hope it is going to come soon.”

It’s a frightening thought that Mbappe, 23, might not even be close to his ceiling as a footballer. His rise comes as the long battle for individual supremacy between veterans Lionel Messi, 35, and Cristiano Ronaldo, 37 — with the former linked to a move to David Beckham’s MLS club Inter Miami after the World Cup, and the latter to a $313 million contract with Saudi Arabian team Al-Nassr — winds down. The throne is about to be vacated, and it feels like a new duopoly is about to begin between Mbappe and Erling Haaland, Manchester City’s Norwegian cyborg up front.

However, only one of them can be found at the World Cup, and in an otherwise pretty even match-up on paper between France and England in Sunday’s (6am AEDT) quarter-final at the Al Bayt Stadium, he looms as the difference-maker. Les Bleus aren’t a one-man team, of course, but the reality is one man can win them this match.

“It’s not hidden, how quick that guy is. You give him one step, and he’s gone,” said Nathaniel Atkinson, the unfortunate Socceroos defender who was tasked with going head-to-head with the Paris Saint-Germain superstar in France’s opening match, which they won 4-1. Mbappe scored one, helped Giroud to another but threatened to cause so much havoc for Australia that the final score was actually quite flattering.

With all due respect to Atkinson, a much better player will get the job on Mbappe this time: Manchester City’s Kyle Walker, who is perhaps one of the few men on the planet equipped with the capabilities of stopping him.

“That’s not to say he’ll keep him quiet for 90 minutes, as Mbappe is sensational and special,” former England right-back Gary Neville said on Sky Sports. “But we have a chance if Walker can match him in certain areas.”

Mbappe has plenty of weapons, but his primary attacking attribute is his explosive pace, which helps him to accelerate past defenders so quickly he can make them look like they’re running the opposite way … on a travelator.

He needs to allow for a little more space to deliver pinpoint crosses, which is what he did repeatedly against Australia, or to have a shot at goal himself, as against Poland twice in the round of 16.

Matty Cash — who was born and raised in England but represented Poland, where his mother is from, at the World Cup — was given the runaround that night by Mbappe, who scored an audacious brace, bringing his World Cup goal total to nine. That brought him level with Messi, who has been to this stage three more times, and he needs only seven more goals to match the all-time record held by Germany’s Miroslav Klose (13). With almost his whole career still ahead of him, you wouldn’t bet against it.

Cash jumped from the ground in complete amazement.

“I spent the afternoon watching his clips, but I’m watching the videos while lying in bed. In real life, he’s burning my legs, that’s the difference,” Cash said.

“He’s a different level. I play in the Premier League week-in, week-out, and I play against top-class wingers, but he’s easily going to be the best player in the world. His speed, movement, and his finishing are all impressive. He’s got everything. I did everything I could, when it was one-v-one I thought I’d done OK against him. I won a couple of races with him. You look over your shoulder, and he’s there.”

But Cash reckons that’s the one area where Walker, 32, can match him better than anyone else.

“Kyle Walker is just as quick as Mbappe,” he said. “He’s England’s best right-back, and he’s got way more experience than me. I don’t need to tell him anything. So if anyone’s going to stop Mbappe, Kyle Walker is the man. He’s rapid as well.”

Mbappe has completed 13 dribbles on the World Cup so far — the second-most of any player — but in his last 24 appearances for England, Walker has been dribbled past just three times.

Walker is so crucial to the cause, Gary Lineker, former England striker and pundit suggested Walker should be rested after their round-of-16 victory over Senegal. Equally, when English media clocked that Mbappe wasn’t at French training on Tuesday, they got excited — until they learned that he was given a pre-planned rest and recovery day, at which point their hearts collectively dropped.

Walker can look back at the past to gain confidence: They have met three times in UEFA Champions League in the last two years and Mbappe only managed to score in their most recent meeting, which City won 2-1 against PSG.

But that was before. This is now, as the banners spruiking Doha’s stance on the matter indicate. World Cup say: “Now is all.” Either Walker comes away from this match with a story he’ll proudly tell his grandkids — about how he nullified the threat of the world’s most dangerous player on the biggest stage of them all, and got England to within one win of their first final since 1966 — or he’ll be just another bit of roadkill on Mbappe’s inevitable ascent to legend status.

Every match of the UEFA Champions League, UEFA Europa League And UEFA Europa Conference League Stan Sport. Returns for the Round 16 in February 2023. All matches streaming ad free, live and on-demand.

The Last of United States Part 3 may not occur, according...

Jacky - January 26, 2023
HBO’s adjustment of The Last of United States is simply increase, however that hasn’t stopped fans from being delighted about where...

France agrees to withdraw troops from Burkina Faso within a month

One Piece deserves better than One Piece Odyssey