A tech tycoon worth nearly half a billion dollars has dedicated his life and body to reverse the aging process.

Bryan Johnson, 45, spends $2million a year on a team of more than 30 doctors and medical experts that oversee almost every aspect of his body and conduct extensive testing. Their aim is to engineer his body into that of an 18-year-old.

Johnson wakes up at 5am, takes around two dozen supplements a day, and eats a strict vegan diet of blended foods. The process is meticulously documented. He has taken 33,537 images of his bowels and monitors everything from his bone weight to his number of nighttime erections.

He and his doctors claim that in two years he has reduced his overall biological age by more than five years and now has the heart of a 37-year-old, the skin of a 28-year-old and the lung capacity and fitness of an 18-year-old.

In his 30s the entrepreneur founded of Braintree Payment Solutions, a hugely successful company which he sold to eBay in 2013 for $800million.

But the lifestyle he once led to build that company left him feeling depressed and suicidal, he told Bloomberg, so he embarked on a journey to understand the workings of his body.

Along the way he founded several bio startups before eventually, two years ago, committing to perhaps his most ambitious project yet – reengineering his body.

Tech billionaire Bryan Johnson, 45, spends $2million a year on a project to reverse the aging of all of his bodies organs 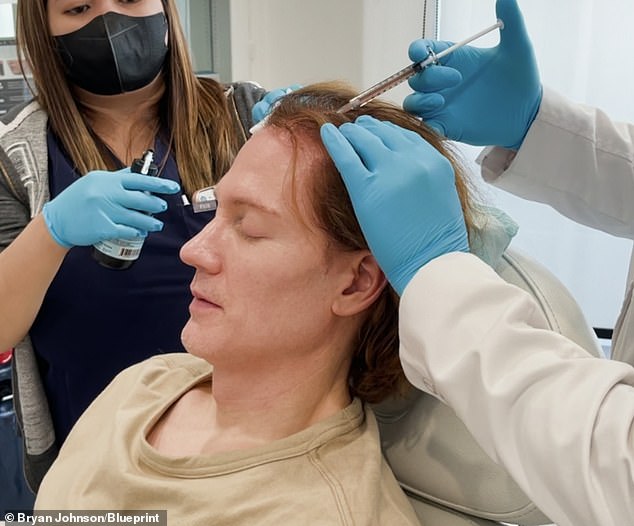 He and his doctors say he has reduced his overall biological age by more than five years and now has the heart of a 37-year-old, the skin of a 28-year-old and the lung capacity and fitness of an 18-year-old

As part of what he calls Project Blueprint, Johnson lives according to an extremely strict regime that looks more like a full-time job.

He has had his pelvic floor blasted with electromagnetic pulses to improve his muscle tone in hard-to-reach places, and wears glasses that block out blue light for two hours before he goes to sleep at the same time every day.

He claims to take in an exact 1,977 calories a day, ensuring his body fat hovers between 5 and 6 percent.

‘My conscious mind is never consulted about what it wants to eat, my body is,’ said Johnson in a 40-minute YouTube video outlining the details of his morning routine.

‘These measurements ask my liver and my heart and my DNA methylation what they need to thrive as biological processes and organs for my body.’

‘It’s not even a guess whether I’m going to have something else,’ he said regarding deviating from the diet. ‘It’s just out of the question.’

Johnson says his aim is to ensure that his brain, liver, kidneys, teeth, skin, hair, penis and rectum are functioning as they were when he was 18.

‘The Blueprint has that kind of potential of reimagining our relationship with health and time, and we really could be on the cusp of something dramatically different and better,’ he added. 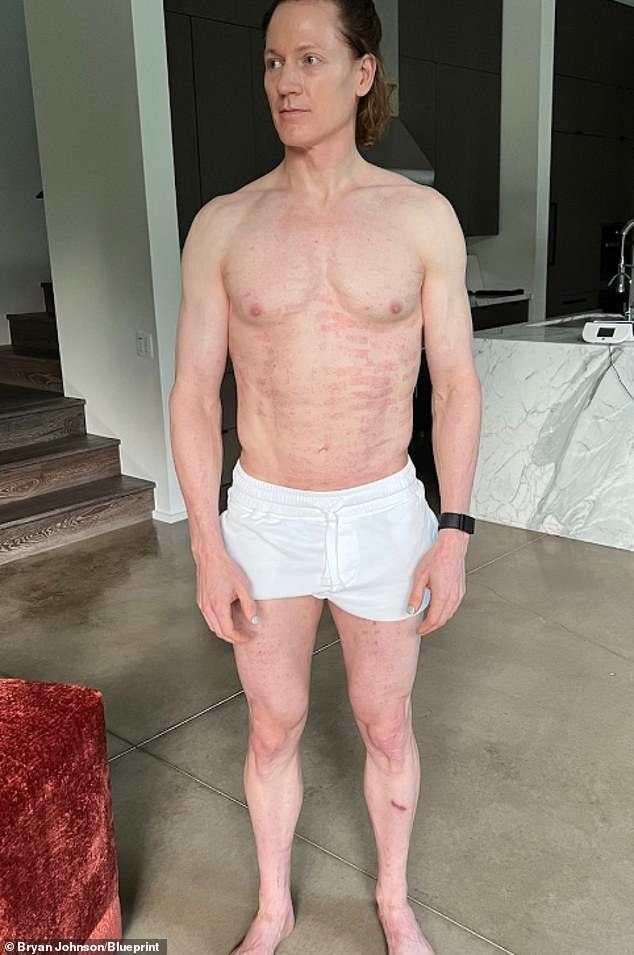 Johnson claims to take in 1,977 calories a day, ensuring his body fat body fat hovers between 5 and 6 percent 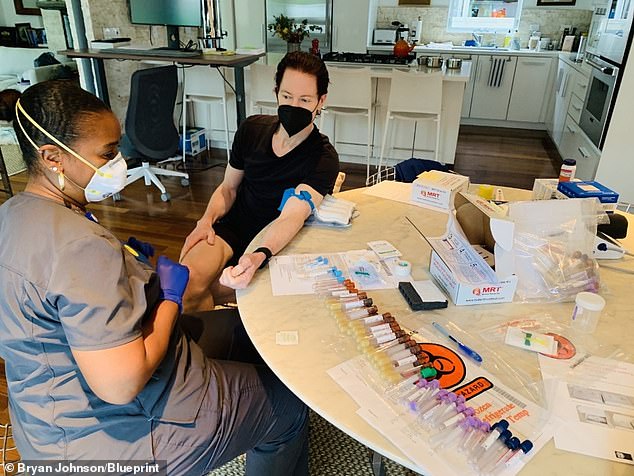 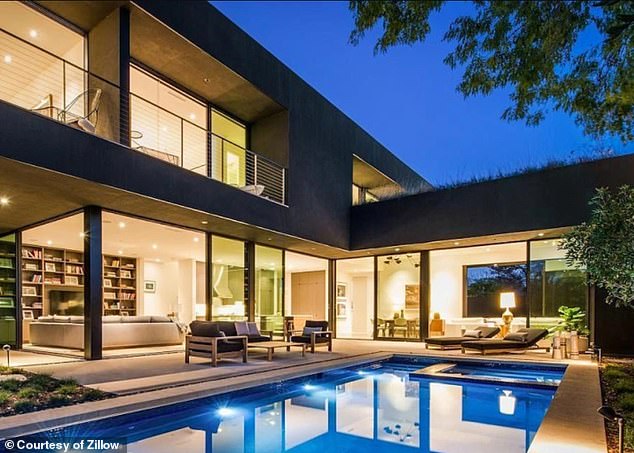 Johnson now lives in Venice, California, in a home he purchased in 2017 for $5.7million 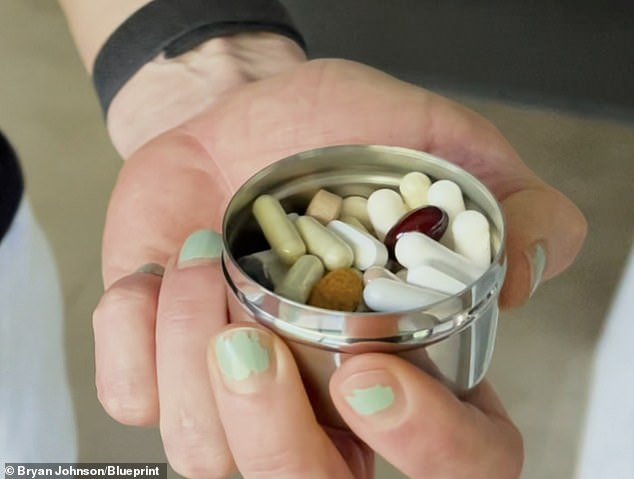 ‘There is no person in the world who is 45 chronologically but 35 in every organ,’ his lead doctor, 29-year-old Oliver Zolman, told Bloomberg.

Johnson and Zolman together read the latest scientific literature and use Johnson as a Guinea pig to test promising cutting-edge treatments.

Zolman oversees dozens of medical procedures on Johnson, many of which are extreme and painful, and measures their results with blood tests, MRIs, ultrasounds and colonoscopies.

For Zolman, the improvements they have been able to make on Johnson’s body thus far are just the beginning. ‘We have not achieved any remarkable results,’ he said. ‘In Bryan, we have achieved small, reasonable results, and it’s to be expected.’

He exercises for an hour a day with more intensive workout sessions three times a week. It is integral to his mission that his bodily functions are tested as much as possible. 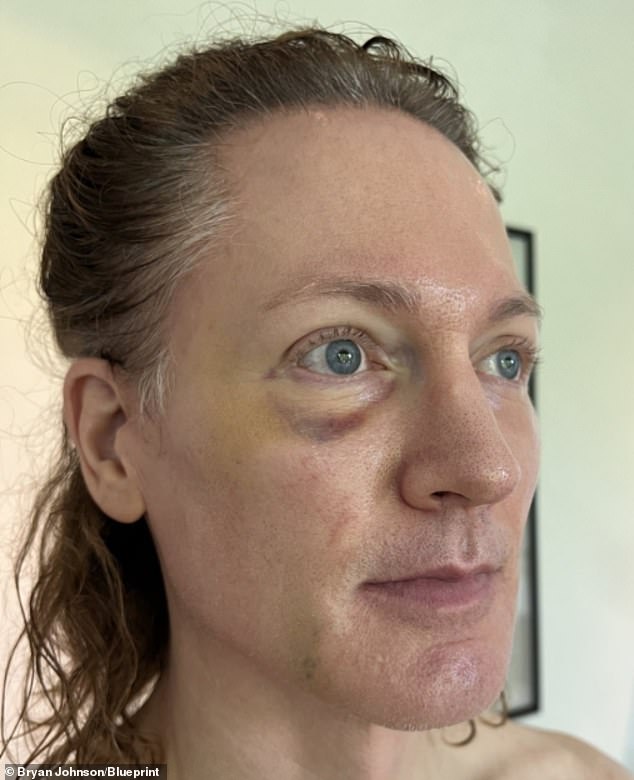 Johnson and his 29-year-old lead doctor, Oliver Zolman together read the latest scientific literature and use Johnson as a Guinea pig to test promising cutting-edge treatments 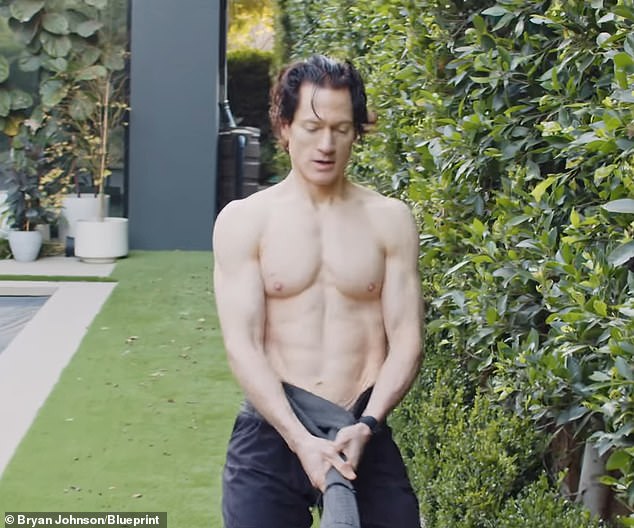 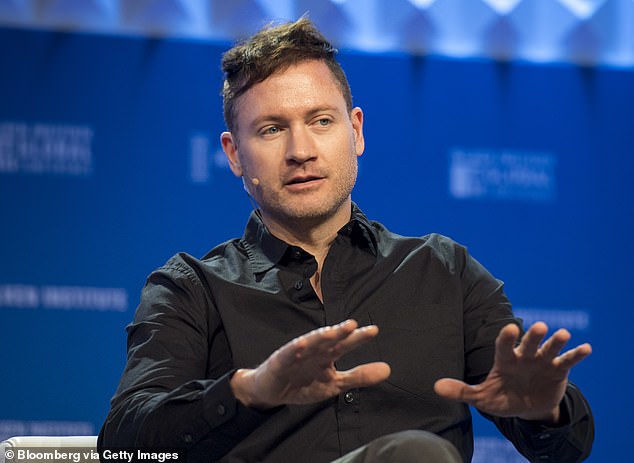 He has undergone a significant transformation since embarking on the project. He is pictured here in 2017

Johnson was born into a large Mormon family in Utah. He was raised by his mother and step-father, who was a truck driver. At 19 went on a two year mission to Ecuador.

As an undergraduate at Brigham Young University, he ran a business dealing cell phones to other students that helped him pay his way through college. He then attended the University of Chicago where he did an MBA and would go on to form Braintree.

He also started OS Fund, a venture capital fund whose mission is ‘to invest in entrepreneurs and scientists who are working on quantum-leap discoveries that promise to rewrite the operating systems of life.’

Later he invested $54million of his own money to fund Kernel, Dirt reported, a company with the not immodest goal ‘to build the world’s first neuroprosthesis to enhance human intelligence.’ The company makes helmet sensors which attach to the head to take recordings of brain activity.

A father to three children, Johnson now lives in Venice, California, in a home he purchased for $5.7million and later modified to include a full medical suite and part of Project Blueprint. 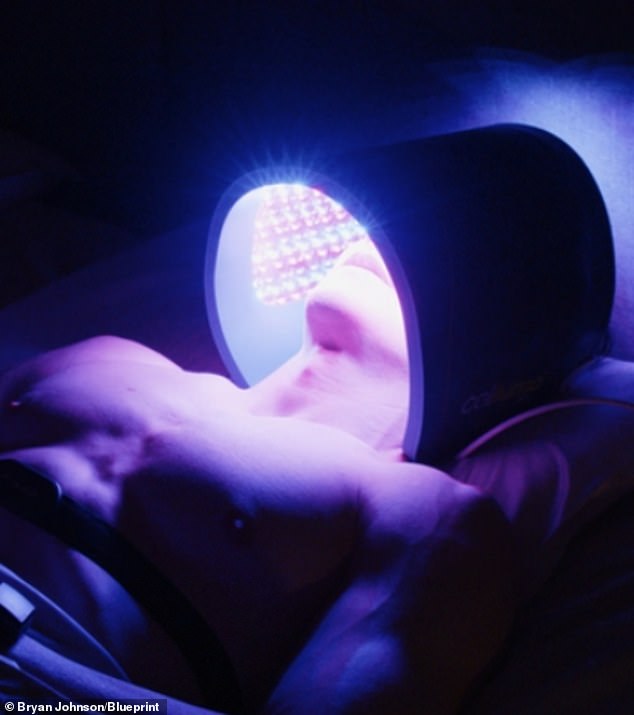 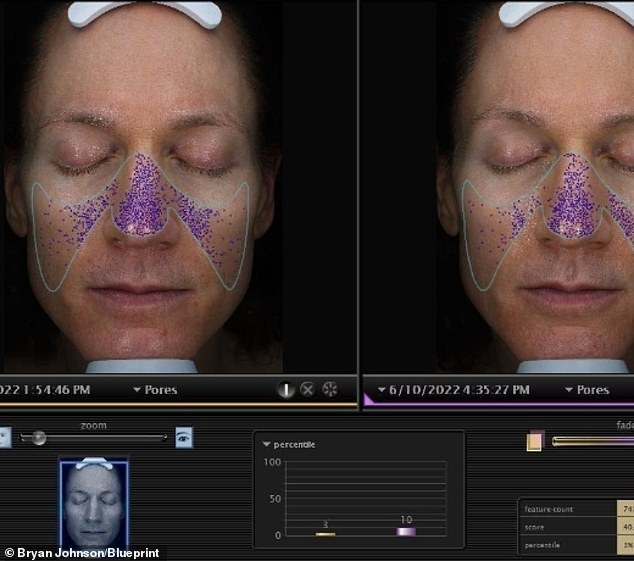 Johnson’s home in Venice’ California, was modified to include a full medical suite 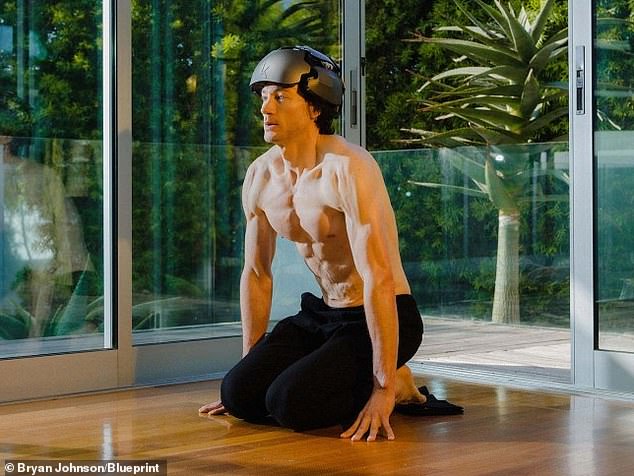 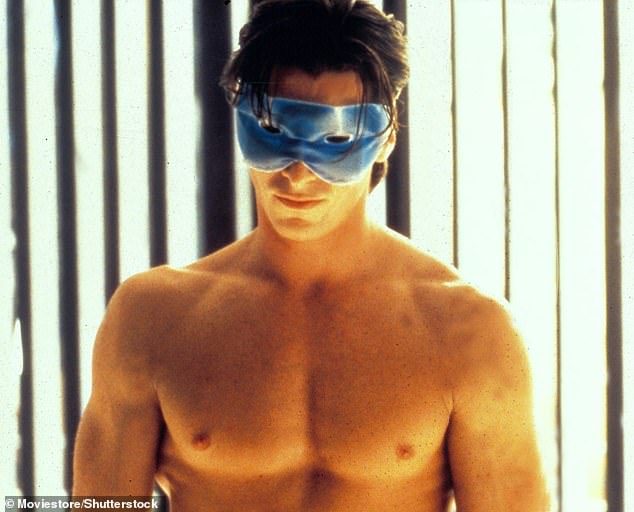 His lifestyle and obsessive commitment to trying to undermine the effects of time have garnered fairly significant criticism, with many viewers of his online content comparing him to Patrick Bateman from American Psycho.

‘This is expected and fine,’ he says of the criticism he’s received.

‘What I do may sound extreme, but I’m trying to prove that self-harm and decay are not inevitable,’ he told Bloomberg.

Although the details are unknown, his doctors suggested to the outlet that he is about to embark on some far more experimental procedures, including gene therapies.

‘There’s got to be a better way than what’s going on now,’ he said. 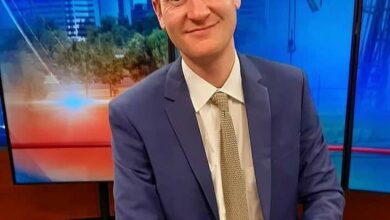 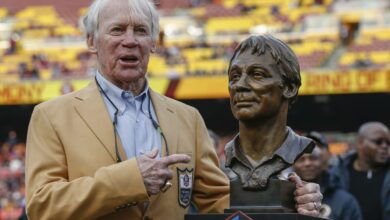 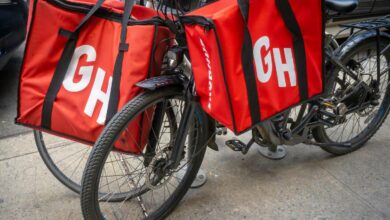