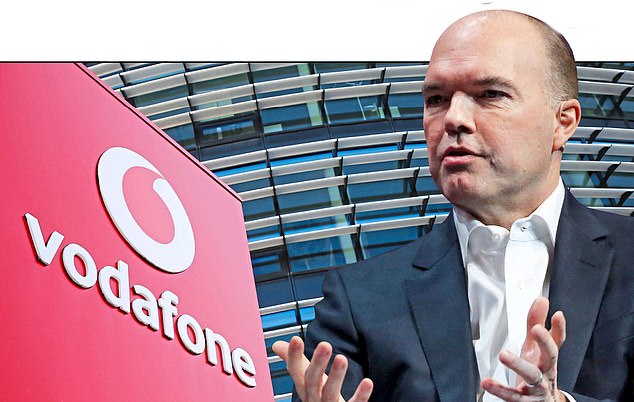 BT and Vodafone hit by rising costs and debt: £10bn wiped out by telecom giants as investors rattled

Nearly £10bn has been wiped off the value of BT and Vodafone as rising cost and debt investors.

Analysts are growing skeptical about Britain’s two largest telecoms companies after reporting lackluster results this month. The pair are sitting on a £65 billion mountain of debt – almost twice their combined worth.

Investment bank Credit Suisse lowered its rating on Vodafone last week. Activist investor Cevian Capital appears to be giving up hope that the group can expedite its turnaround efforts — recently cutting its stake in the mobile giant.

Bosses Philip Jansen at BT and Nick Read at Vodafone are also under fire as they try to turn the companies’ fortunes around.

Vodafone shares are down 17 per cent this year, while BT’s are down a quarter.

They struggle with many of the same issues, experts say.

Matt Britzman, an analyst at stockbroker Hargreaves Lansdown, said: “One of the shared issues is cost, which has risen dramatically over the year.”

Vodafone has hatched an £879m cost-cutting plan to tackle inflation and rising energy prices to power its infrastructure. But this still means price hikes for UK customers and job losses.

A stumbling block was the international activities, especially the largest market, Germany. “Both companies performed reasonably well in the UK,” said telecoms expert Paolo Pescatore of PP Foresight, looking at recent financial results. “But the challenges lie in their overseas businesses.”

BT has also revealed plans to cut spending, a further £500m a year, bringing the total to £3bn by the end of 2025. Britzman called it “a mammoth task” and said markets had to be convinced that it was “possible without harming the company.” .

Both companies are grappling with debt and rising interest rates, potentially adding additional pressure. Vodafone’s debt stands at £45.5bn – almost double its market value of £26bn. BT stands at £19bn. The company is worth £13 billion.

Both EE owner BT and Vodafone are partially paralyzed by the need to pay hundreds of millions of pounds a year to upgrade and add infrastructure, while facing competition from smaller or cheaper rivals. Broker AJ Bell’s Russ Mold said: ‘Clients are quite willing to switch providers to get a better deal. That’s a tricky mix, especially since the debt limits their room for maneuver at a time when interest rates are rising.’

Jansen has also been dubbed ‘Food Bank Phil’ by striking BT workers who criticized his 32 per cent pay rise to £3.5 million a year, while the group runs a staff food bank.

Despite this, Pescatore said he believes “people look back and think he did a pretty good job” as he struggles with costs, a large pension fund deficit and debt.

Indeed, French telecom billionaire Patrick Drahi has built up an 18 percent stake in the company.

Read recently agreed to sell half of Vodafone’s Vantage Towers business in Germany to reduce debt.

But Pescatore said the “jury is out” on his rule. Investor reaction to recent results supports his view.

BT shares are back where they were before it announced its results on November 3, while Vodafone is down 11 per cent since its figures were announced on November 15.

Is the sun setting on London equities?