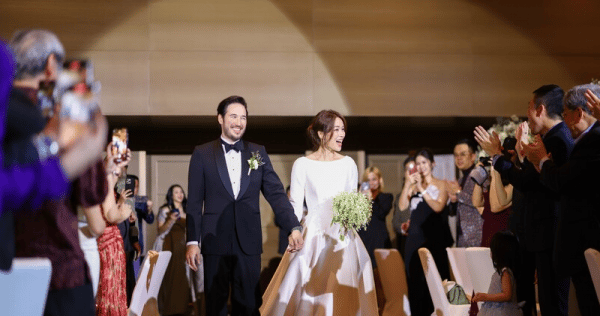 Rebecca Lim woke up at 9am yesterday morning (Nov 27) feeling a sense of peace and calm — unusual for a woman about to get married in a few hours.

Her wedding at the Ritz Carlton, with over 600 guests in attendance, was set to start at 3pm, but there were no nerves for the actress. Starting the day late because she wakes up puffy, Rebecca spent the morning pampering her bridal party, mum and grandma instead.

The 36-year-old told AsiaOne in an interview this afternoon: “I was more excited about them getting made up, since I’m used to getting made up myself almost every day.

“So I was excited for that, making coffee for them, treating them like the stars.”

After her engagement to Matthew Webster last November, Rebecca invited six female celebrities to discuss married life and make preparations for her big day in her recent meWATCH show With Love, Becks.

With the show concluding last week, and no leaks of wedding news or invitations, the public was none the wiser that the wedding would take place so soon.

She said: “I have no idea how everything turned out so hush-hush. With 600 guests, I was well-prepared for everything to be shared sooner or later. I didn’t tell my guests to keep it quiet or not share about it when they received their invitations.”

At the wedding dinner however, she did hope her guests could “be with us in the moment” and only share photos they took the next day. She said: “I think everyone really enjoyed it for the whole four hours. People were having real conversations with each other, and for 600-over guests, when there was a speech being said on stage, everyone was silent — which is unheard of.”

Rebecca had previously mentioned in an interview that she planned about 40 tables for her own family, with 130 family members set to attend. Despite the rush of the big day, Rebecca vividly remembers two poignant moments from the night.

“One was when I was walking down the aisle and that was the first time Matthew saw me in my gown that day, and he was in tears,” she said.

The second memory was also a tear-jerker.

She said: “It was during dinner when I was giving my speech and thanking my parents — this time I was the one in tears.” With family being so important to Rebecca, conducting the tea ceremony was a must for her.

“It was important to me because it was about giving respect to and thanking our elders, especially our parents and grandparents — for me, just my grandma — for raising us up,” she said. “I insisted I wanted the tea ceremony and it was very cosy and intimate.”

She also spent some quality time alone with her mum the night before the wedding, but it was only while she was reciting her marriage vows that she realised being married traditionally meant leaving her family.

“That was the moment it hit me,” she said. “But Singapore is so small, we can see each other every day anyway. At the end of the day, family is in our hearts so it doesn’t matter where you may be.”

Rebecca and Matthew, also 36, are both born in the year of the tiger and always planned to get married before the year — a tiger year — was up.

When asked, Rebecca laughed at the Chinese saying that a mountain can’t have two tigers. The two ‘cats’ are planning to move into their ‘mountain’ by June 2023, with Rebecca currently staying at her husband’s place, she told 8World in an interview.

Rebecca also plans to have a child as soon as possible.

Sadly, it’s not just their home renovations that are causing delays, but honeymoon plans are on hold for the couple as well, with Rebecca filming for a new drama series starting next month.

After a beautiful wedding, Rebecca doesn’t think she will miss anything about single life.

She told AsiaOne: “I mean, I’m moving onto a new and exciting phase of my life now, so I’m looking forward to what the future holds.”

No part of this article can be reproduced without permission from AsiaOne.