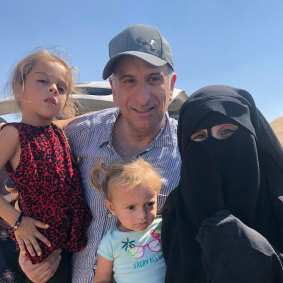 Looking at the crumbling reputations of our deceitful former Prime Minister and our “deeply religious” Governor-General, I too believe in miracles. Young Bill, Killcare Heights

The people have spoken, the liberals have not listened

After another defeat for Matthew Guy and the Liberals in Victoria, a Liberal supporter, Chris, is reported to have said: “We live in a state of idiots” (‴⁣⁣We live in a state of idiots’: Liberal faithful weep at the second Guy knockout”, smh.com.au, November 26). Or could it be that the liberals’ policies (or lack thereof) are putting people off? Former MP Jan Kronberg was no better: “We still have to have a fighting spirit because the liberals are on the right side of history. We… can see where the dangers are. We just have to be there when people come to their senses.” This is pure fantasy and optimistic philosophy about a painful defeat: by the next election, will four 27-year-olds really be “on the right side of history”? Kronberg claims that Guy is “the best political mind we have [in Victoria]“. People disagree. With such deep vision and critical thinking, the Liberals seem destined to remain on the opposition benches for many more years. David Gordon, Cranebrook

To be fair: It must be admitted that, overall, Daniel Andrews and Victorian Labor got it right in the eyes of the majority of Victorian voters, while the Liberals didn’t. Why? Well, for starters, the 18th century French moralist Luc de Clapier, “Everything that is unjust offends us if it is not beneficial to us” must be pondered, along with Shakespeare, “Tell me where fantasy is bred, or in the heart , or in the head?” In the 21st century, at this stage of fog and bewilderment, all this decidedly working-class Australian, raised in a family of Liberal voters, can say is, “Damn if I know.” Howard Hutchins, Chirnside Park (Vic)

One can only conclude that after their defeat in the Victorian state election to the Daniel Andrews-led Labor government on Saturday, the goose that lays eggs has been well cooked for the Liberal Party and its Coalition partners, the Nationals, in the garden state. With NSW state elections due to take place in March next year and Labor opposition outperforming the Perrottet government in the polls, it very well could be that if Labor prevails then it would leave only one state jurisdiction, Tasmania. , with a Conservative government in power in Australia. Eric Palm, Gympie (Queenland)

When a Coalition party loses an election, the reaction is predictable. They are shocked and in disbelief, stating that they had great candidates and had run a good campaign. They reason that their opponents played dirty and that the voters were stupid or duped. Oh, the bliss of ignorance. Graham Lum, North Rocks

I am shocked by those who oppose the repatriation of ISIS families (“O’Neil allays repatriation fears,” Nov. 26). His lack of charity would freeze the beer. The families of terrorists are not terrorists themselves; to say otherwise is to have a totalitarian mentality. I can understand the concern of Assyrians and Yazidis in western Sydney, but their concern is misplaced. Furthermore, it was the miserable triumvirate that created the conditions that allowed ISIS to flourish. Before the US, UK and Australia destroyed the Iraqi state, ISIS was a small sect. ISIS filled the void – the void – created. As a consequence, all Iraqis suffered, although I admit that Assyrians and Yazidis suffered more than most. Michael BoylanGlebe

My heart goes out to those poor young Australian women and their children finally repatriated to their homeland from the horrors of life in Syrian refugee camps, only to feel unwelcome. Wouldn’t it be nice if those people who would ostracize them could open their hearts to see them not as potential perpetrators of terrorism but as unwitting victims, just as some protests may have been? Okay, they’re not in my backyard, but if they were, I’d welcome them and try to be supportive. Just give them a fair chance. It’s what Australians do. Craig Forbes, Lewisham

What exactly are the people of South West Sydney afraid of? That they are going to be threatened by some easily recognizable women and children if they venture outdoors? Mayors say their biggest concern is the refugees already living in their cities. Is the sight of women being made second-class citizens by their fanatical husbands likely to remind refugees of their own persecution? We gave shelter to the refugees. We should do the same with IS families. David Rush, Lawson

Around the world, each year, some 100,000 refugees are resettled in third countries to avoid death and persecution. Many people confuse this with Australian citizens illegally staying for years in a foreign camp just coming home. Marilyn Shepherd, Angaston (SA)

Your correspondent calls for a police “service”, rather than a police “force” (Letters, November 26). In 1987, NSW Police Commissioner John Avery introduced Community Based Policing, whereby authority was devolved to local area levels rather than dictated from headquarters, and focused on equitable service for all members and sections of the community rather than simply enforcing the law. This included the formally legislated name change to the NSW Police Service and it worked well until, in 1996, the NSW government imported a British Police Commissioner, who changed the name back to the Police Force. So the precedent is there. John Ure, Mount Hutton

Your correspondent suggests a name change from Police Force to Police Service to focus more on community service. In fact, between 1990 and 2002, our police force was known as the NSW Police Service. In 2002, it was renamed New South Wales Police, with then Police Minister Michael Costa stating that he did not “buy the argument that we need the word ‘service’ in a community-based policing approach”. In 2006 the name was changed again to the NSW Police Force, confirming that “the more things change, the more they stay the same”. Rodney Crute, Hunter’s Hill

The Police Force became the Police Service in 1990 under the command of Commissioner John Avery. He was never supported by elements of the Service as he was an administrative officer who had supposedly never “faced a tough man”. In 2002, he became the NSW Police, and then the Force again in 2006. His motto is “Punishment quickly follows crime”, so the occasional use of inappropriate force by officers It’s not a surprise. A refocus on service is surely due. Dennis Fardy, Warriewood

Your correspondent, praising the developers’ push for high-density development near transportation hubs (Letters, November 26), claims that private car spaces could be eliminated “with public transportation at the door” and ” without the need for your own car. Do you assume that no one ventures beyond the city limits or that you only need transportation to get to work? I wonder how we would have managed as a young family transporting our children and baby pods without a car at a time when there was no scheduled public transport. There are a myriad of tasks that cannot be accomplished with the use of public transportation alone. And the absence of car spaces means higher profits for developers, as more homes can be built within the same building envelope. Stephen Foster, Glebe

Going through the patient journey as someone with newly diagnosed COVID, a GP and eligible for antivirals, I have found that all is not ideal with the current system on weekends. Early Sunday, with symptoms worsening, I called the helpline and was given the list of respiratory clinics by a very helpful woman working the night shift at home. After going through the registration process, I waited until 8am when the practice opened, only to be told that the doctor could not send the script electronically as is normal practice for GPs – he would have to pick it up and it was some kilometers away. . Fortunately, a GP colleague is helping me. One has to question the flaws in the much praised Telehealth COVID management. Louise Dolan, Birchgrove

blessed by the bard

Of course, having a Shakespearean toon accompany one of my missives is one of my proudest moments (PS, November 26) Robert Hosking, Paddington

“Dinner on the terrace with your dog” (“Hats off to the thriving suburban food scene”, November 26)? Do not count on me. In addition to indicating BYO, there must also be a DFZ (dog-free zone). But I’m so glad that only one of my favorite local restaurants has made it to the last Herald Good food guide. John Flint, Saint Leonard

A toast to the coast

It just reminds me why I moved from Sydney to Illawarra (“Bondi to Byron: Exodus from the Eastern Suburbs,” Nov. 26). Jeff Apter, Keiraville

The lesser of two EVs?

To your correspondent (Letters, November 26): I’ve never seen an EV with a smoking exhaust, so there’s always that. John Christie, Oatley

the digital view
Online comment on one of the stories that drew the most comments from readers yesterday about smh.com.au
Government reaches agreement with David Pocock to allow him to pass IR laws
Of richard leigh: How refreshing to see a constructive debate leading to better legislation instead of a compromise that benefits no one.

‘I swear it was image-shopped’: Josh Hodgson on THAT biceps photo – WhatsNew2Day