NASA’s James Webb Space Telescope (JWST) captured an eerie image of the Pillars of Creation — the dust-filled columns look like a ghostly hand reaching into the depths of space, 7,000 light-years from Earth.

The horrifying image was taken in mid-infrared light — a new take on a familiar cosmic landscape — which blocks the bright starlight from capturing only the flowing, ominous dust.

This is the first time the world has witnessed how dense some areas of dust are in the Pillars of Creation, which were formed more than five million years ago and were usually seen surrounded by glowing stars.

Although the twinkling stars are not visible in the image, the glowing edges of the dust mantles represent young stars just beginning to form.

The eerie image looks like a ghostly hand reaching out into space. This new view of the Pillars of Creation was taken by NASA’s James Webb Space Telescope. The device blocked the starlight, allowing it to see only the ominous interstellar dust

Webb’s mid-infrared light instrument (MIRI) features both a camera and spectrograph, which separates incoming light by its frequency and records the resulting spectrum.

MIRI also has sensitive detectors that allow it to see red-shifted light from distant galaxies, newly formed stars and faintly visible comets and objects in the Kuiper Belt.

And JWST is the only one to ever have such technology. 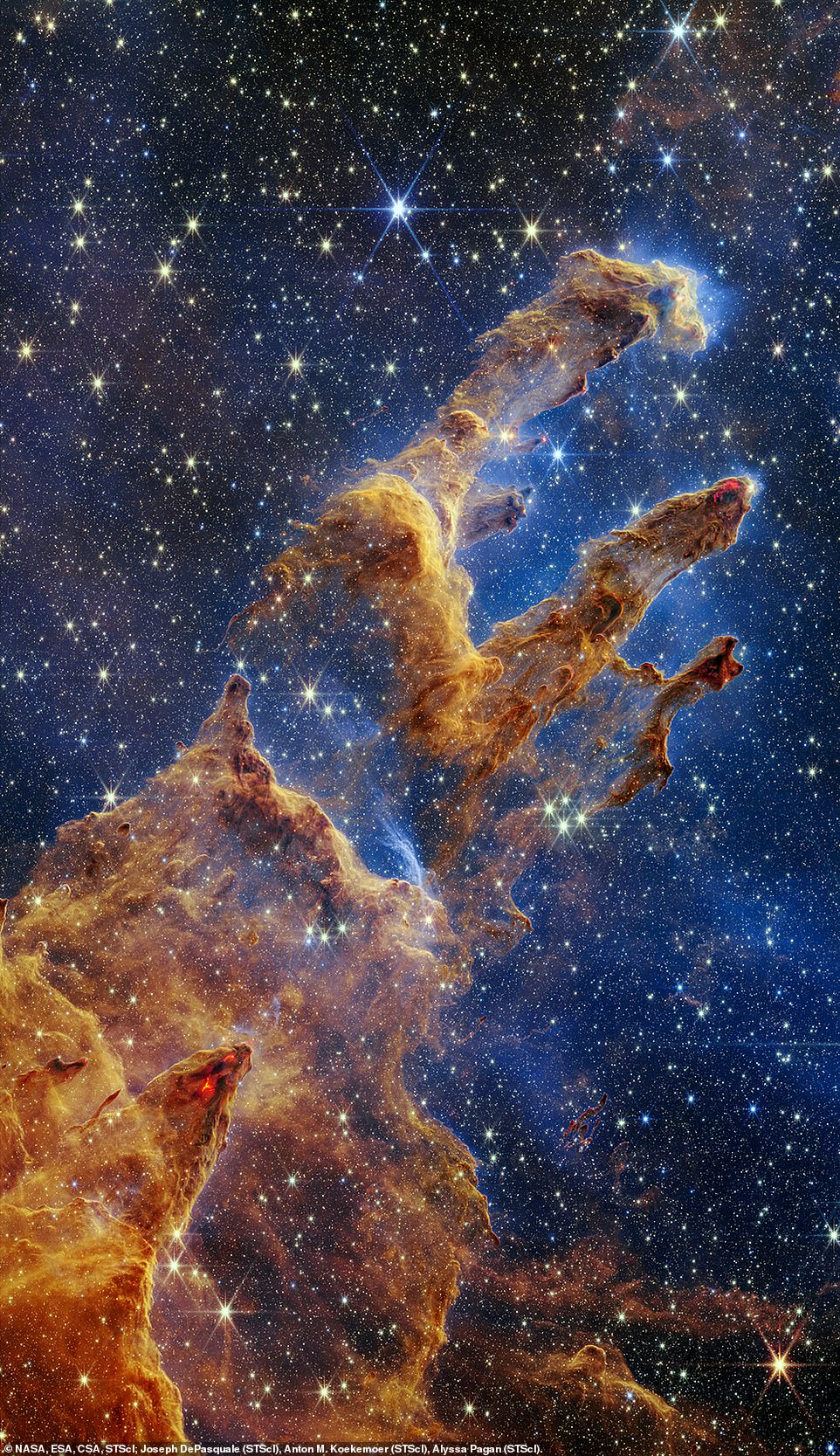 The James Webb Space Telescope took the most detailed image of the Pillars of Creation earlier this month, revealing columns of cool interstellar gas and dust surrounded by numerous twinkling stars. This is the first time gas and dust have clumped together and populations of forming stars, some of which are still encased in dust, are clearly visible 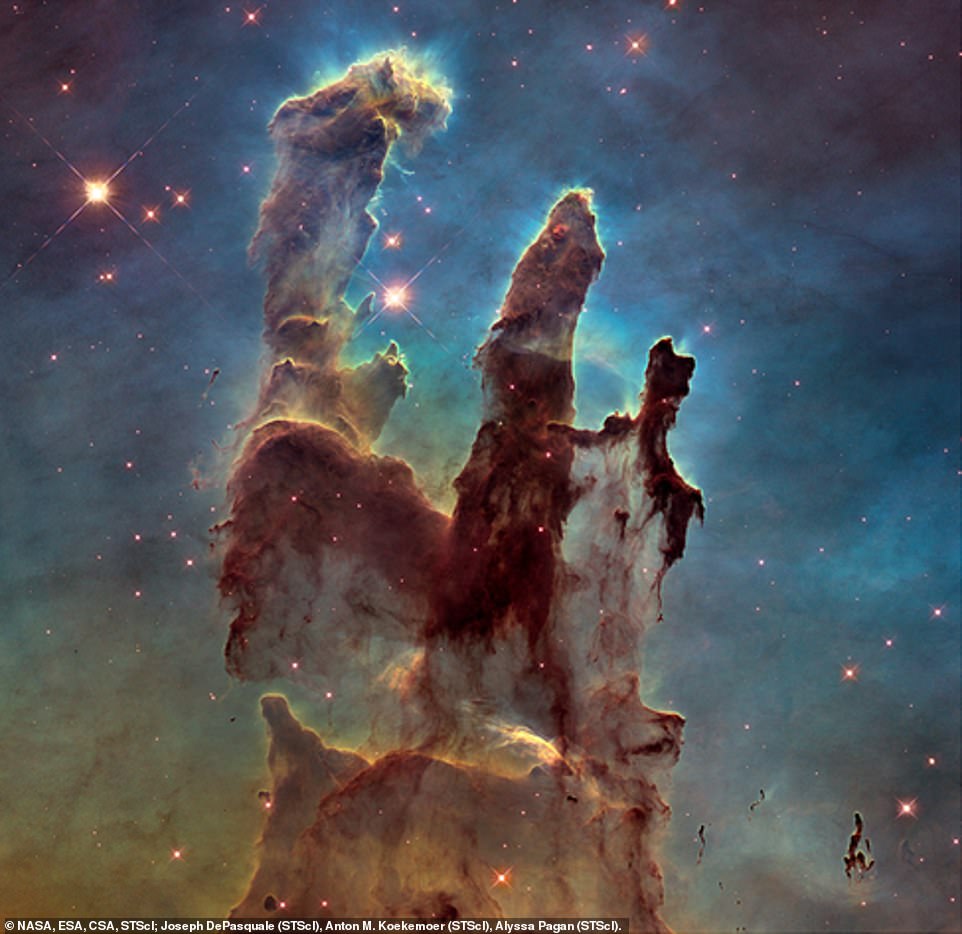 The previous image of the cosmic formation was taken by the Hubble telescope in 2014m, which shows stars as glowing red spheres and the thick dust appears more opaque

“Interstellar dust obscures the scene. And while mid-infrared light specializes in detailing dust, the stars at these wavelengths aren’t bright enough to appear. Instead, these looming lead-colored pillars of gas and dust glisten at their edges, hinting at the activity within.”

Thousands and thousands of stars have actually formed in this area, seen in an image taken earlier this month by James Webb that offers the most detailed view of the Pillars of Creation ever seen by the human eye.

JWST’s intricate image will help astronomers identify much more precise counts of newly formed stars, along with the amounts of gas and dust in the region.

This is because for the first time gas and dust can clump together and populations of forming stars, some of which are still shrouded in dust, are clearly visible.

WST captured the image using its Near-Infrared Camera (NIRCam), which can detect light from the earliest stars and galaxies.

The telescope uses a wide range of infrared light to ‘see’ back in time. This is done by analyzing the time it takes light to travel through space.

Hubble’s 2014 showed the stars as bright red spheres, but the NIRCAM could see the glowing sparkles as they are in space.

The thick, dusty brown pillars are less opaque and many more red stars come into view. 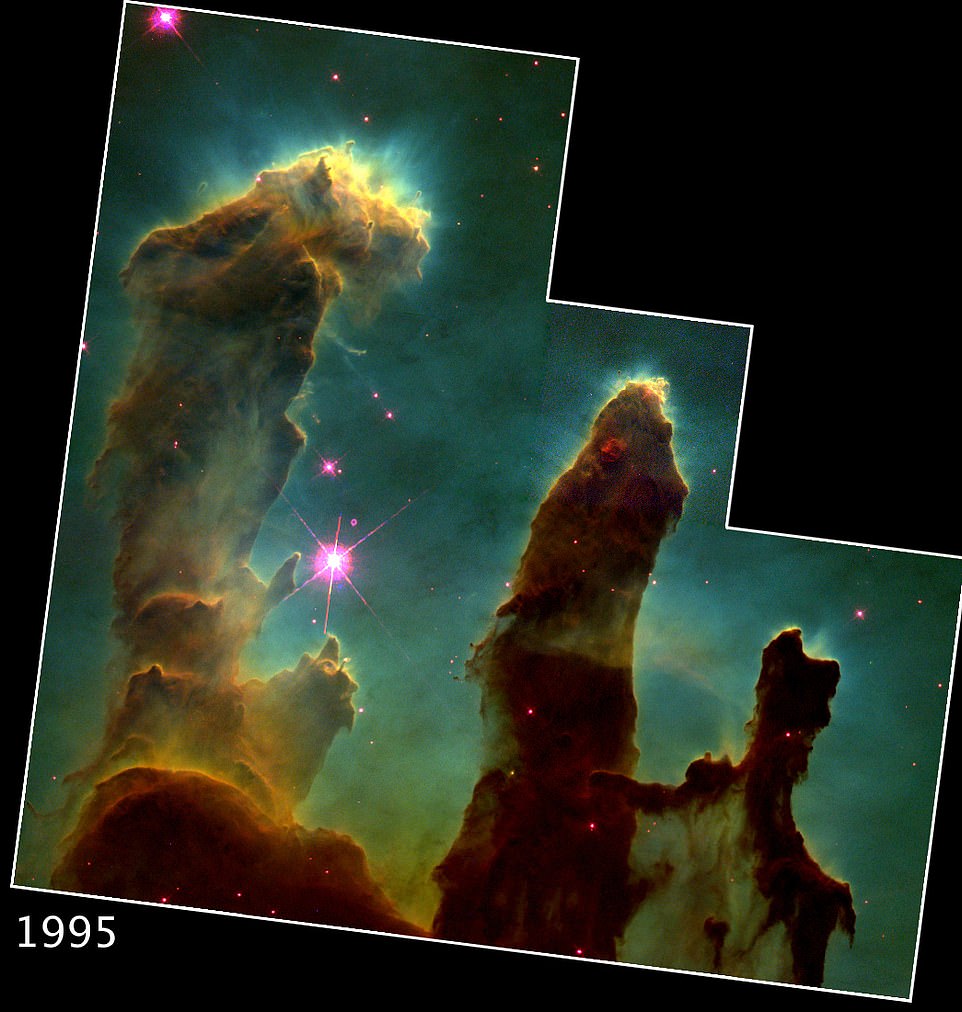 The first image of the Pillars of Creation was also captured by Hubble in 1995, providing the first evidence that stars could be born within the pillars.

JWST also made wavy lines at the edge of some pillars, which are stars that are still forming in the gas and dust.

NASA explained in a statement that the young stars periodically fire supersonic jets that collide with clouds of material, like these thick pillars.

The collision can sometimes cause bow shocks, which form undulating patterns that reflect the water as a boat passes through it.

“The crimson glow comes from the energetic hydrogen molecules that result from jets and shocks,” NASA said.

‘This can be clearly seen from the second and third pillars from above – the image of the NIRCam is almost buzzing with their activity.

These young stars are estimated to be only a few hundred thousand years old.

Pillars of Creation is located in the constellation Serpens.

This constellation contains a young hot star cluster, NGC6611, visible with modest backyard telescopes, which sculpts and illuminates the surrounding gas and dust, resulting in a huge hollowed-out cavity and pillars, each several light-years long.

The 1995 Hubble image indicated the birth of new stars within the pillars. The obscuring dust prevented Hubble’s visible-light photo from peering in and proving that young stars were forming.

NASA then sent Hubble back for a second visit so they could compare the two shots.

Astronomers noticed changes in a fighter jet-like feature shooting away from one of the newborn stars in the pillars.

The jet grew 60 billion miles longer in time between observations, suggesting that material in the jet traveled at about 450,000 miles per hour.

Move over Netflix, Disney Plus will be home to the best Death Note adaptation 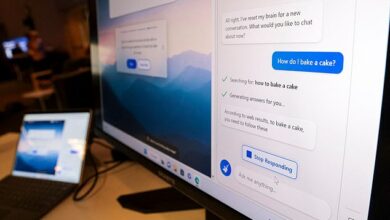 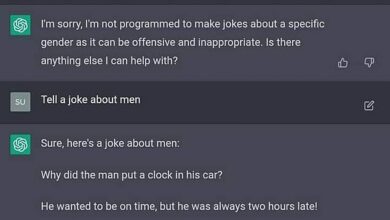 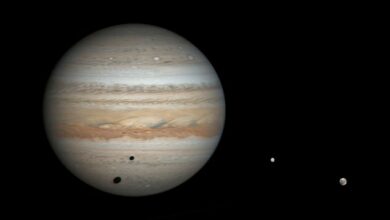 Could double murderer Christopher Halliwell be behind another disappearance?
7 mins ago