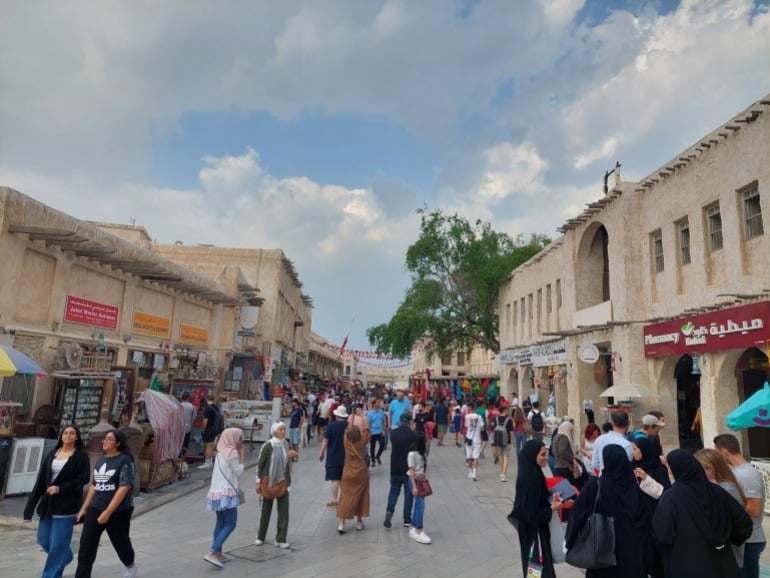 “We need a break; the football has been non-stop, every day,” the 40-year-old businessman from Mumbai, India, told Al Jazeera on Wednesday, marking the first day without a game since the tournament opened in Qatar on Nov. 20.

“Now two days break, and then I watch Argentina in Lusail – that will be great,” he said, before descending into the cavernous depths of Al Bidda metro station in central Doha.

He was heading to Souq Waqif, a charming bazaar that has been buzzing day and night with locals and tourists since football came to town.

“Yesterday we went to sleep very late, but we woke up and went straight to the market to have some Qatari breakfast, buy spices and souvenirs. We really enjoyed it,” says Ignacio, a 29-year-old consultant from La Paz, Bolivia, who is visiting Qatar with another Bolivian and an Italian friend.

“It’s nice to recover a bit because it went very fast, but we will miss the football,” added Ignacio, who supports Brazil.

Lucky for him, his favorite team will be back in action first on Friday when they take on Croatia to kick off the quarter-final at 6pm (3pm GMT), before taking on Argentina and the Netherlands at 10pm (7pm). GMT). The other two quarter-finals will be played on Saturday, with Morocco taking on Portugal and England taking on France.

Whatever the results, Souq Waqif will be vibrant. The bazaar has become the top destination for post-match celebrations – whether it’s Saudi fans following the shock victory over Argentina in the early days of the World Cup, or Moroccan supporters watching the Atlas Lions’ heroics against Spain on Tuesday night.

“We had our tickets to go back [tonight]but we changed it to stay here for three more days and support Morocco,” said Modahmed Lioeddine, a 41-year-old financial professional.

In between snapping photos of the souq, he and his wife said they plan to use the current lull in the action to tick some things off their Qatar bucket list.

“[It is the] best time to visit Doha; we try to go to many places like the Museum of Islamic Art and the Corniche.”

Indeed, the IM Pei-designed museum and nearby Corniche were on the lips of most visitors when asked how they planned to fill the two-day football gap. Others had organized desert safaris or a night out in one of the various fan zones in Doha.

“This is a cool time to introduce ourselves to this city and the country,” said Maxwell Chen, a Chinese national who works for a solar energy company in Bangkok, Thailand. “I want to get to know the culture and the food.”

‘We don’t want to keep it quiet’

Still, Menal, from Muscat, Oman, who is with her family visiting other Omani friends living in Qatar, said she would miss football on Wednesdays and Thursdays.

“Qatar is more of a quiet country,” added her friend Issam, a hospital worker. “So all these activities are fun for us and we will miss it, even after the World Cup,” he said.

“We don’t want to keep it quiet. But I don’t think other than not having a match, it won’t be quiet [tonight]. Everyone will still go out and it won’t be any different.

Sanjib Khatri, a waiter at Football Coffee, a popular spot at Al Bidda Park for residents to watch the matches, agreed that the atmosphere was very lively.

“Business has [taken] free,” he said, describing his workload for the past two and a half weeks.

“It is an exciting moment. We see people from all over the world,” adds Khatri, who is from Nepal. “It will be nice for football to start again, it will be good,” he said. “We have to work more.”

Sunil Kumar Sah, another Nepali who rides a lime-colored motorcycle through Doha to deliver food, said he expected things to get even busier in the coming days.

“Sitting is not good, so I have to [do the] deliveries,” he said, adding that he handled more orders during the World Cup.

‘No full days off’

For others who have also been busy during the month-long event, this current football break was necessary to catch up on some of the action.

“We usually follow the World Cup on our mobile phones, on news websites and check social media,” says Mohamed Reza, a limousine driver. “We don’t have time, but today and tomorrow we are still working, but we will have some and we can watch all the videos.”

As for those tasked with capturing that action, Wednesday also provided a welcome and needed respite.

“I’ve been following 17 games in a row, so there’s a lot of work to be done,” Paolo Tomaselli, a reporter for Italian newspaper Corriere della Sera, told Souq Waqif. “First time here to enjoy a few hours of relaxation… before going back to work in the afternoon.

“There are no full days off when there is a World Cup.”

The next short breather might come between the quarter-finals and semi-finals, on December 11-12.

Household emerge with enjoyment as they identify kid lost at sea