A woman who filed for divorce and got back with her ex-husband three months later says their relationship is “better than ever” after having a second baby.

Alex Scanlon, 26, of Dayton, Ohio, decided to divorce her husband, Josh, 27, in September 2020 after the couple argued and struggled to adjust to having a newborn.

But the couple decided to give it another chance and got back together just three months later, and despite spending nearly $2,000 on divorce proceedings, they moved back in together in December 2020.

They welcomed their second daughter, Ophelia, five months old, in April 2022, and say their marriage is “better than ever.” 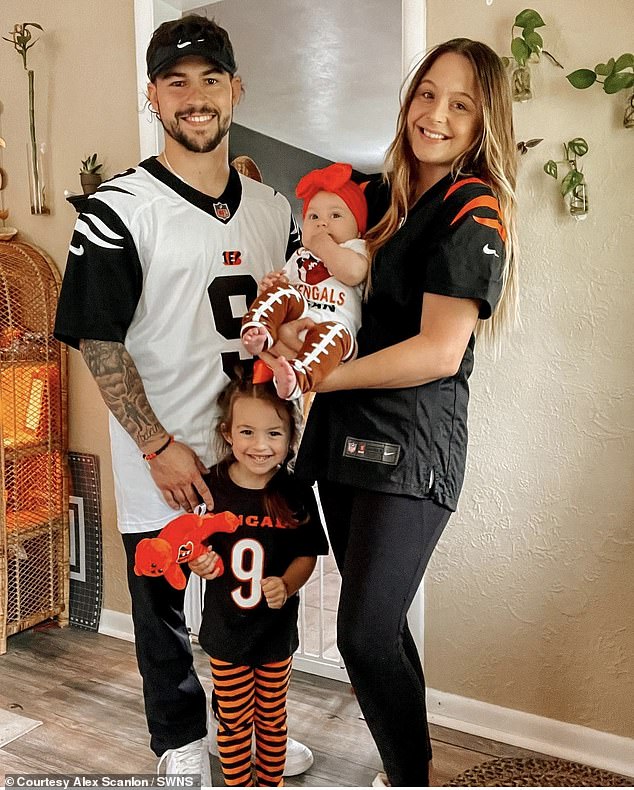 The couple welcomed their second daughter, Ophelia, five months old, in April 2022 and say their marriage is ‘better than ever’

The couple – who began dating in April 2018 – got engaged just two weeks after they met and married in December 2018 after finding out they were pregnant with Harper, now three.

Alex filed for divorce in September 2020 when their constant bickering got too much — and they both dated other people, she said.

But they realized they had the same problems with their new partners and started to miss each other.

Alex took the plunge to text Josh to tell him how she felt and that she thought they “made a mistake” and he moved back in December 2020.

The couple canceled their divorce — which they had already spent $1,948 on — and bought new wedding rings to “start over.” 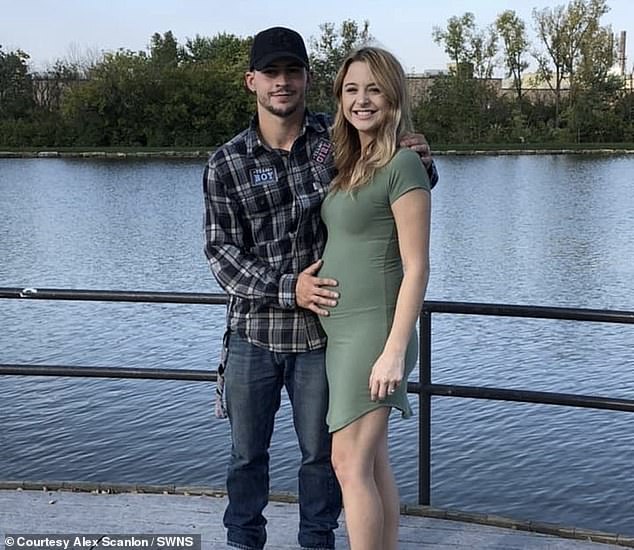 Alex Scanlon, 26, of Dayton, Ohio, decided to divorce her husband, Josh, 27, in September 2020 after the couple argued and struggled to adjust to having a newborn, she said

Alex, a stay-at-home mom, said, “I had a crush on Josh on social media for ages and practically stalked him on Facebook.

“I noticed he was in the same bar as me one night, so I tracked him down on the dance floor.

“We decided to get engaged after just two weeks and then found out I was pregnant three months into our relationship.

“We managed to plan the wedding in about a day and just had it in my mother-in-law’s living room.

“When we got Harper, we both struggled to adjust to this new life.

“I had severe postpartum depression and Josh, and I was in constant competition with each other. 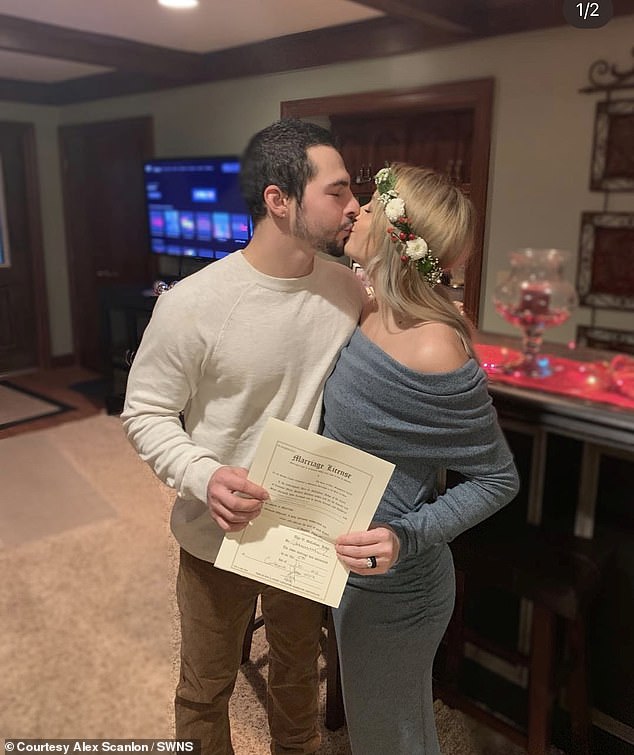 The happy couple got engaged in 2018 and welcomed their first daughter, Harper, now three, that same year

“We argued about what the other was doing. I had enough and filed for divorce.

“We both started dating different people but still had the same issues, so I realized it was our individual issues.

“I missed Josh and reached out to say I did and that I thought we made a mistake.

“We canceled our divorce lawyers and he moved back in with us. Now we are really in a good place and enjoying our time with our newborn daughter.”

Josh, who works for Ford Transmissions, said, “We were pretty inseparable at first.

‘We got pregnant three months into our relationship, got married eight months later and had a child a year later. We really didn’t get time to get to know each other and our personalities. 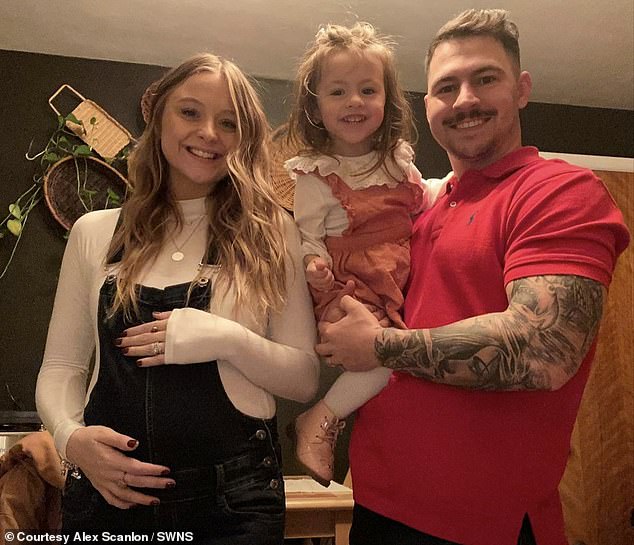 The happy family during Alex’s pregnancy with Ophelia. The pair said they are now communicating with each other to resolve the issues they are facing

“In our roles in marriage, we felt overwhelmed by our own ways. That’s why we dropped out.

“We thought we’d be happier on our own.

“At first I was happier not dealing with Alex, but I started to miss her and I missed talking to her every day.

“The things that bothered me didn’t seem to be as important as I had claimed when we were together.

“We are stronger together and we’ve done a great job managing all the stress this time compared to when we decided to break up.”

Alex and Josh met in early 2018 after first messaging via Facebook.

“I saw we were already friends on Facebook, so I unfriended him and added him back to get his attention.

“It worked and he messaged me.

“We were going back and forth looking for a date, until I was stalking his Facebook and saw he was in the same bar as me. 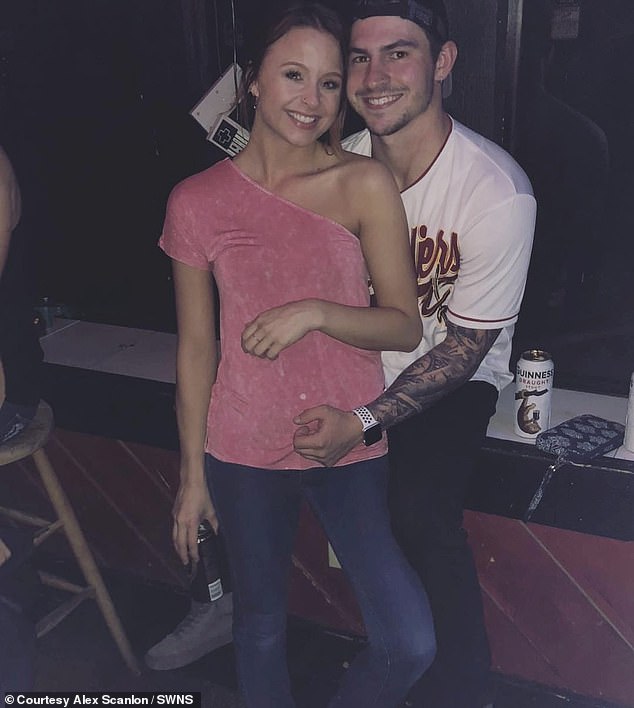 “I tracked him down and it clicked.

“After another date, he didn’t leave after that.”

Josh said, “I thought it was funny when she told me this.

“I mean, everyone sneaks up on people from time to time with social media.

“It really made me feel good to know that someone sensed that beauty was interested in me.

“Her decision to unfollow me and follow me back worked because she got my attention.”

Alex and Josh started dating in April 2018 and decided to get engaged just two weeks later.

“We were at a bar and decided to go get engagement rings,” Alex said.

A few weeks later we found out I was pregnant.

“In December I just turned around and said, ‘let’s get married.’

“Two days later we did it.

“We didn’t even have rings, just silicone straps and I couldn’t find a white dress that fit over my stomach in time.”

The couple welcomed baby Harper in April 2019 and have struggled with the adjustment in their lives.

“I had severe postpartum depression and we were in constant competition over who did more,” Alex said.

“All this responsibility was new to both of us.

“We just had that constant back and forth comparison.

“We mourned our old life.”

It became too much of a good thing and Alex decided to end the marriage in September 2020.

Josh said, “I was upset, but I expected it.”

“We both started dating but found out we had the same issues,” Alex said.

“I had a fight with my new partner, which is why he didn’t come to Thanksgiving.

“It made me think that no matter what we argued about, Josh would always show up.

“I texted him and said, ‘I really miss you and I think we made a mistake.’

“He came over that night and moved back in.”

Josh said, “Alex had called me and her attitude seemed different.

“She talked to me in a way that made me feel like she missed me. And that she had the same realizations as me.

“When we actually decided to get back together, we took it easy.

“We focused less on sexual connection and more on emotional connection. We didn’t sleep together for about two weeks.

“We were focused on talking and bonding about the issues we had and what we could do differently to make sure we stay healthy and happy.” 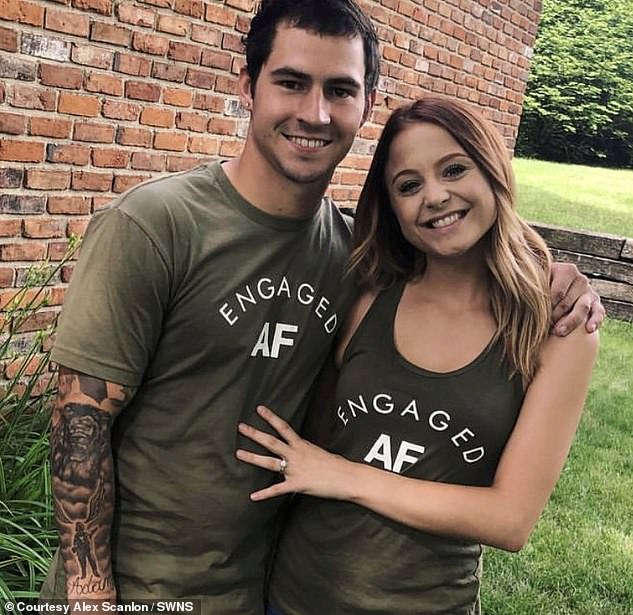 The couple fell head over heels in love and got engaged just two weeks after they started dating. They became pregnant within three months

The couple had to cancel their divorce lawyers – they had already spent $1,948 on it – and they became pregnant with their second daughter in July 2021.

They each had individual counseling and sessions as a couple to work on their communication within their relationship.

“We were so excited to be pregnant again and to go through that newborn stage again,” Alex said.

They welcomed Ophelia in April 2022 and have loved their time with her.

“Josh hadn’t even held a baby when we had Harper and I was just very critical of everything he did,” Alex said.

“This time he learned and listened to podcasts and was a huge support.

“We still argue sometimes, but when we go to bed, we apologize.

“Hopefully we renew our vows and have a little more of a proper ceremony.”

If you liked this story…

A mom who became her friend’s surrogate shares misconceptions and challenges she faced.

And another couple has confessed what they find so annoying about each other after two years of marriage.

Also, a dating expert reveals the one question you should ask to find out if someone is serious about a relationship

Peter Doherty is having a baby with Katia de Vidas, his wife. 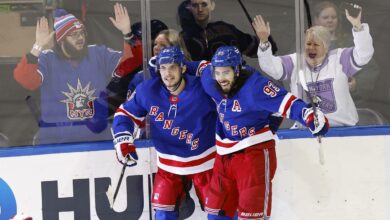 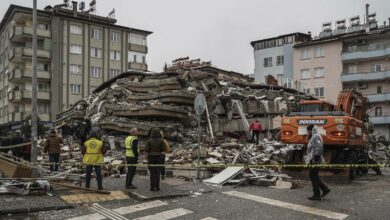 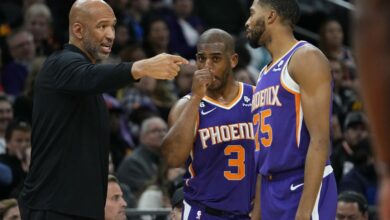 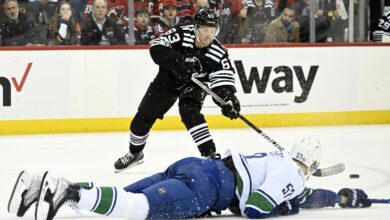