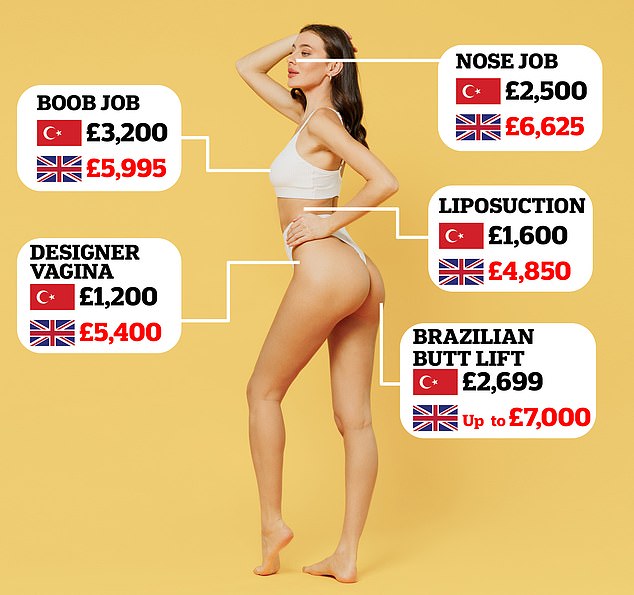 Thousands of Britons go overseas each year seeking bigger breasts, a perkier bum, a flatter nose, or to get excess pounds of fat sucked away.

While most patients return unscathed, some end up needing follow-up NHS care due to avoidable complications from going under the knife abroad.

Despite the potential catalogue of risks, Britons unhappy about their appearance are lured by clinics in places like Turkey which charge a fraction of the price.

It has seen Istanbul become a ‘capital of butchery’, according to one campaigner.

Breast augmentation, where implants are inserted to increase the size of boobs, can cost £3,000 in Turkey, whereas going under the knife in a British clinic can be nearly twice as expensive.

Other procedures, like the popular ‘designer vagina’, where women dissatisfied with the external appearance of their genitalia get parts of their labia cut away, can cost as little as £1,200.

This is a pittance compared to the upwards of £5,000 women pay to get the op done in the UK.

Not only is the surgery cheaper, many Turkish providers also toss in a holiday stay at a resort, and so so called ‘VIP’ airport transfers, as well as tossing in meals, massages and other enticing perks.

Here, MailOnline highlights some of the price differences between cosmetic ops in Turkey and the UK, and what experts say you should consider when thinking about getting surgery abroad.

Cosmetic procedures in Turkey often go at bargain basement prices compared to their British counterparts. Turkey and UK prices have been sourced from multiple websites (model is a stock image)

Prices: from Right Choice and Medaway

And here’s how British procedures stack up

In the UK, cosmetic surgeries are regulated by organisations like the Care Quality Commission, which inspects all facilities to make sure they are safe.

Surgeons themselves are monitored through the General Medical Council, which sanctions or strikes off anyone found to be practising unsafely or unethically.

Cosmetic surgeons practicing in the UK also need insurance in case disaster strikes and a patient sues them for malpractice.

This ensures the patient is fully protected and ongoing care costs from any arising complications can be met.

Many British surgeons also factor in aftercare costs, such as follow-up consultations and any potential further surgeries into the cost of the procedure.

This is not always included, or can be extremely limited, with overseas operators.

Lastly, the cost of medical equipment and staff wages are usually higher in the UK than other countries.

These factors all help to explain why surgery generally costs more in the UK, British surgeons said.

Many Turkish treatments come as a package holiday, something that the NHS and professionals in the UK highly recommend against.

One operator, Medicci Aesthetics, offers a five-day stay in an Istanbul hotel with breakfast included for two people for patients who book a procedure with a Turkish surgeon.

It also boasts of overnight nurse visits, airport transfers, a free beauty therapy, a 24/7 emergency line, and two massages as part of its surgery package.

Right Choice UK offers a gastric sleeve surgery, where part of the stomach is cut out to help people lose weight, with three nights in a hotel and all meals included for £4,750.

The British Association of Plastic Reconstructive and Aesthetic Surgeons, a professional body for UK cosmetic surgeons, warned treating surgery as a holiday sends the wrong message and is potentially dangerous.

‘We think this is very misleading and creates the wrong impression,’ they said.

‘Firstly, cosmetic surgery is a serious and major undertaking and should not be considered as a “holiday”.

‘To properly heal and reduce the risk of complications, you shouldn’t sunbathe, drink alcohol, swim or do any water sports.’

The organisation also advised people to avoid flying after surgery, depending on the length of the procedure, due to risk of developing potentially life-threatening blood clots.

Blood clots are a potential risk after any operation as a result of tissue, fat or collagen entering the circulatory system or damage to veins during surgery.

This risk is heightened by getting on a plane shortly after surgery due to being immobile for hours during the flight and the change in air pressure putting the body’s blood circulation under greater strain.

For procedures such as breast surgery and liposuction the recommended wait time is five to seven days after, increasing to seven to 10 days after facial cosmetic procedures or tummy tucks.

Many Turkish operators only include a fraction of this post-surgery period in their hotel packages, meaning Britons must either fork over more money to stay in the country, or risk complications on a flight back home.

The NHS also warns against getting cosmetic surgery abroad.

It advises Britons looking to get surgery overseas to always ensure they have two consultations with the surgeon who will actually be carrying out the procedure.

These should be held two weeks apart, to provide a cooling-off period to ensure someone isn’t rushed or pressured into having surgery, as is standard in the UK.

They should also avoid paying to go to a hospital they have never personally seen.

Shazam! Fury of the Gods trailer breakdown: 6 thing you may...

Pensioner, 91, who passed away in surge at his house had...