Are you the kind who feels bad after just one glass of wine, while your friends down half a bottle or more and feel fine?

There are many reasons why people react badly to small amounts of booze — even the composition of your gut microbes may play a role — and there are steps you can take to help.

People who feel sick after just one or two drinks often think they have some kind of allergy to alcohol. In fact, a true allergy is very rare and the symptoms, such as difficulty breathing and abdominal pain, are often severe enough to make you never touch a drop again.

More common is an alcohol intolerance. This is usually linked to a genetic flaw, meaning you’re producing a less active form of an enzyme called aldehyde dehydrogenase.

Are you the kind of person who feels bad after just one glass of wine, while your friends down half a bottle or more and feel fine? writes Dr. Megan Rossi (pictured)

The liver initially breaks down alcohol into acetaldehyde and at this point this enzyme should go to work converting it into acetic acid (the main ingredient in everyday vinegar).

If aldehyde dehydrogenase doesn’t do its job, acetaldehyde, which is toxic, lingers in the body and causes a cascade of symptoms that often include nausea and vomiting as the body tries to expel it — as well as headaches. It can also cause blood vessels to dilate, leading to facial flushing and nasal congestion.

How much alcohol a person with an intolerance can tolerate before becoming ill varies – I see people in the clinic who can hold a few glasses just fine and others who can barely sniff a drink. I’m afraid the only way around this one is to push your limits.

Our gut microbes have a sleep-wake cycle. Just two days of not getting the sleep we need can affect our balance, with fewer Verrucomicrobia and Lentisphaerae bacteria, which are associated with impaired performance on cognitive tasks.

For others, it may be part of the drink – not the alcohol itself – that’s the problem: for example, the gluten in beer or sulfites that are added to wines as preservatives and are also present on the grapes (the levels tend to be higher in white wines ).

Sulfites can cause a range of symptoms including nasal congestion, wheezing, hives and severe hangovers – people with eczema and asthma may be particularly sensitive to them.

Switching to organic wines can help — while they contain some sulfites from the grapes, they don’t have added sulfites, so they may be easier to tolerate.

A study published in the European Journal of Clinical Nutrition in 2019 found that switching to organic wine led to fewer alcohol-induced headaches in sulfite-sensitive people.

Histamines in wine and beer can also cause a problem. This chemical is produced as part of the fermentation process and can cause a hot, flushed face, hives, nausea, or diarrhea if you drink.

Histamine levels can vary with the drink, depending on the vintage, type and fermentation process (red wine contains more than white wine, at 60 to 3,800 micrograms per liter, while white wine contains between three and 120 micrograms), so it is a matter of trial and error to see which one suits you.

A more surprising factor in all of this is the health of your gut microbes. Research suggests that they support the work of the liver – the so-called gut-liver axis.

So if your gut microbes aren’t in good shape, your liver may not process alcohol as well as it can.

While our understanding of the link between gut microbes and liver function is still in its infancy, a 2017 study from the Institute of Liver and Biliary Sciences in New Delhi, India, found that people with liver disease received a daily fecal transplant (that is, a treated stool transplant, which creates a new community of gut microbes) for one week produced ‘significant’ improvements in liver function, and that improvement persisted a year later.

What we do know for sure is that excess alcohol can affect our gut microbes, especially those higher up in our gut, where the alcohol is absorbed. 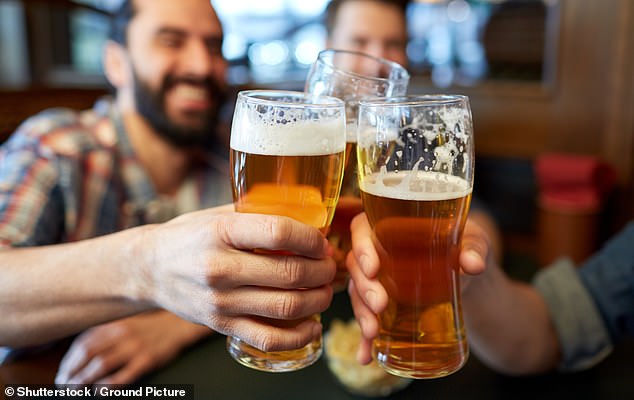 For others, it may be part of the drink – not the alcohol itself – that’s the problem: for example, the gluten in beer or sulfites that are added to wines as preservatives and are also present on the grapes (the levels tend to be higher in white wines )

In turn, they produce less of the organic fatty acids, such as butyrate, that fuel the protective intestinal lining: at the same time, alcohol itself irritates and weakens our intestinal lining.

As a result, toxins can move more easily from our gut into our bloodstream, causing more inflammation (and releasing histamine) and this can leave us feeling raw. The effect on the gut is also what leads to “grog swamp” – the sloppy poop that can follow a night of one too many.

But if your gut microbes are in good shape, they’re more likely to produce more butyrate, which may help the body better resist the inflammatory effects of alcohol.

That’s why when I go to a party I make sure to eat something like my smoke beans the day before and after (see recipe). These provide the ideal blend of plant diversity (including prebiotics – plant compounds that are microbe fertilizer) that my gut microbes will feast on, as well as satisfy salty and carby hangover cravings.

And when you arrive at your party, anything bubbly will likely make you feel worse as a rule.

This isn’t an old wives’ tale. Researchers at the HPRU Medical Research Center in Guildford put this to the test by giving volunteers fizzy or flat champagne.

Those who got the fizz got drunk faster. That’s because the bubbles cause the alcohol to be absorbed into your bloodstream faster, overtaking your liver’s ability to digest it so quickly — and the higher your blood alcohol concentration, the more toxic the impact.

And speaking of fizzy drinks, be wary of mixers that contain artificial sweeteners.

A 2015 study from Northern Kentucky University found that if you drank vodka and diet soda or vodka and regular soda, the “diet” version actually led to a 25 percent higher blood alcohol concentration. This is because the sugar slowed down the stomach’s absorption of alcohol — a high-fiber meal would be even better, of course.

On a night out I always prioritize eating food while drinking to slow down the absorption of alcohol and give my liver a chance to keep up, and try to switch every other drink to non-alcoholic – sparkling water with frozen berries or kombucha.

And if the worst happens and you get a hangover, hydration is key. While old-fashioned water will do, you can also try an electrolyte drink, which contains salts such as potassium and can help you absorb fluids better while rehydrating, especially if you’re suffering from diarrhea or vomiting.

So by all means enjoy partying, but take these steps to ease the pain the next day.

These are packed with prebiotics (for feeding good gut microbes) and provide 10g of fiber per serving. Top with a fried egg for B vitamins, key to maintaining a healthy liver.

Heat the oil in a frying pan over low to medium heat, add the onion, garlic and spices and fry for a few minutes.

Add the canned and sun-dried tomatoes and simmer over low heat for 15 minutes.

Add the beans and olives and cook for another 15 minutes.

Finally add the tamari or soy sauce, sweetener, vinegar (if using) and the spinach leaves and chilli flakes. Simmer for a few minutes and then season to taste.

Serve with egg and a dollop of yogurt, hummus, or both.

I remember from my younger years (I was born in the 1930’s) when bread got stale and was only suitable for toast, but now bread develops large patches of green mould. Why?

It’s a really interesting observation, and it might have something to do with the recipe changes, especially the lower acidity in modern commercial breads.

This explains why sourdough bread, which, as the name suggests, tastes a little sour, has a longer shelf life even without the addition of chemical preservatives such as calcium propionate, potassium sorbate and sorbic acid that are commonly used today. The longevity of sourdough is due to the lactic acid bacteria used to make it, which naturally produce antifungal acids.

Another factor is how the bread is stored. Bread is surprisingly moist and mold likes a moist environment.

Nowadays, bread is kept in plastic bags, which keep the moisture in, while in the past paper bags were used to let the water out (even better is to wrap it in a tea towel). Although this causes the bread to dry out and become stale more quickly, there is less chance of mold forming.

‘Did Holly and Phil manage to sneak in?’: Twitter users mock This Morning duo during Zelensky speech
12 mins ago