Days after taking over Twitter and a week before the U.S. midterm elections, billionaire Elon Musk has positioned himself as ‘Twitter Complaint Hotline Operator’ of one of the most important platforms in American politics.

The change was made during another wild day for the social media giant under Musk, as Twitter’s advertising chief, Sarah Personette, tweeted on Tuesday that she resigned following an exodus of nearly the entire senior ranks.

Musk has said he won’t make major decisions about the content or restoring banned accounts before setting up a ‘content moderation council’ with diverse viewpoints. But his own behavior as a prolific tweeter has signaled otherwise.

He’s engaged directly with figures on the political right who are appealing for looser restrictions, including a Republican candidate for Arizona secretary of state who credits Musk with enabling him to begin tweeting again after his account was briefly suspended Monday.

Musk even changed his profile to ‘Twitter Complaint Hotline Operator’ – with a photo of himself when he was a toddler holding a telephone. 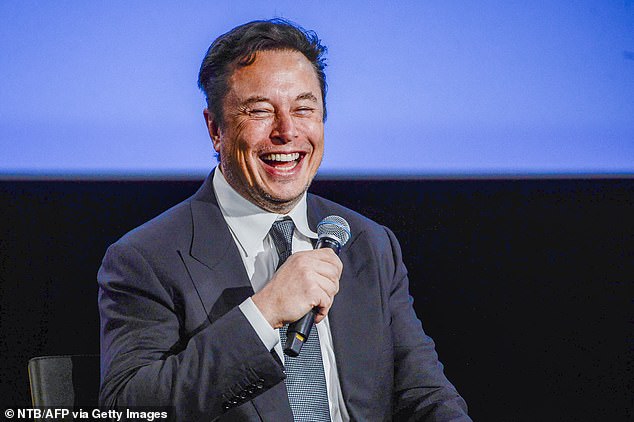 Days after taking over Twitter and a week before the U.S. midterm elections, billionaire Elon Musk has positioned himself as ‘Twitter Complaint Hotline Operator’ of one of the most important platforms in American politics 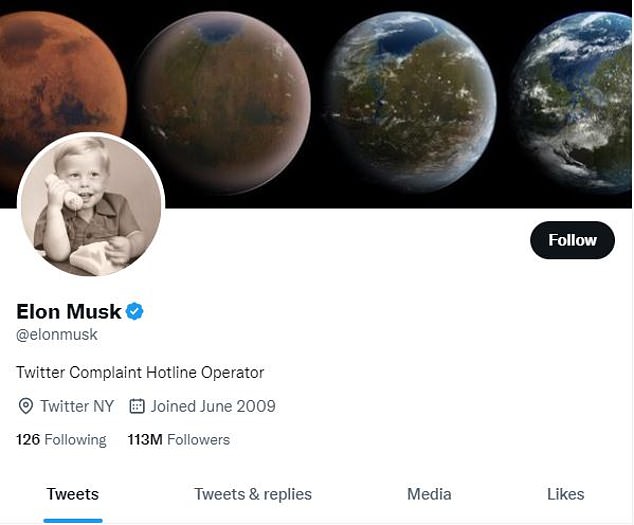 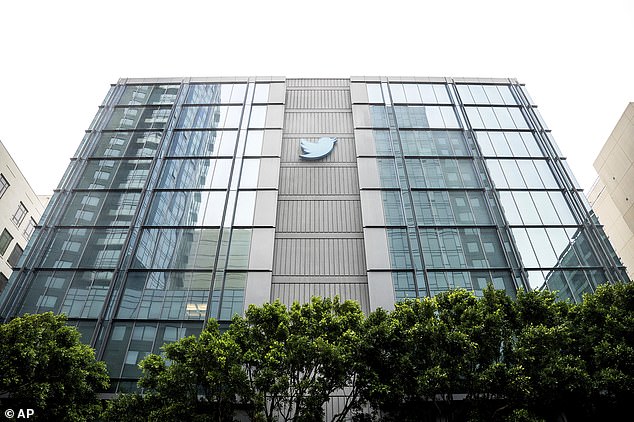 Musk has said he won’t make major decisions about content or restoring banned accounts before setting up a ‘content moderation council’ with diverse viewpoints. But his own behavior as a prolific tweeter has signaled otherwise

But it is almost impossible for those outside of Twitter to know what strings he is pulling or whose accounts have been suspended: The company has stopped responding to media questions, except for the few that Musk answers by tweet.

Chief People and Diversity Officer Dalana Brand announced on Tuesday in a LinkedIn post that she had resigned last week as well. General manager for core technologies Nick Caldwell confirmed his departure on Twitter, changing his profile bio to ‘former Twitter exec’ by Monday night.

Personette, Caldwell, and Brand did not respond to requests for comment.

Musk’s team is meeting with advertisers this week in New York, as the company’s increasingly skittish customers raise alarms about the potential for harmful content to appear next to their ads. 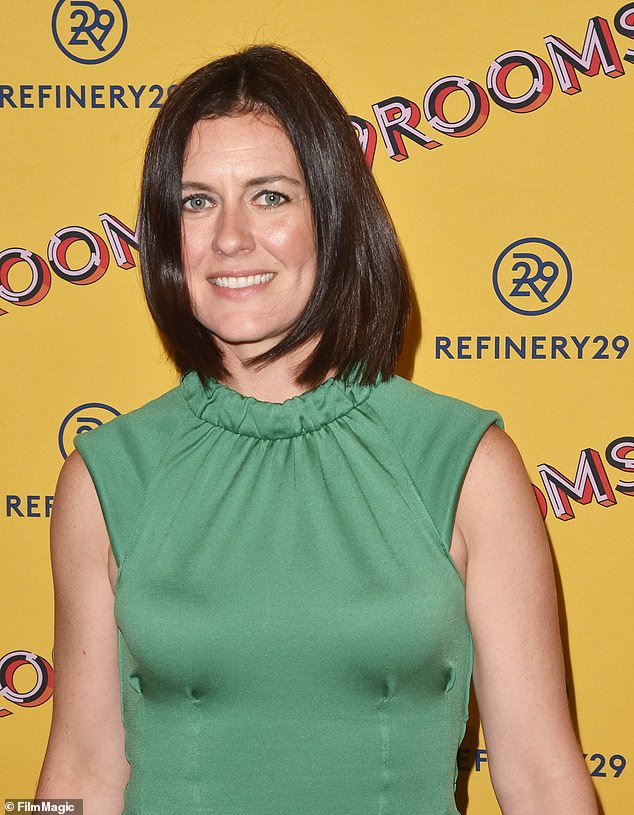 It was another wild day for the social media giant under Musk, Twitter’s advertising chief, Sarah Personette, tweeted on Tuesday that she resigned following an exodus of nearly the entire senior ranks

A coalition of more than 40 advocacy organizations including the NAACP and Free Press sent an open letter to Twitter’s top 20 advertisers on Tuesday, asking them to pull their ads if Musk guts content moderation on the platform.

Mediabrands, a unit of ad holding company IPG, has advised its clients to pause advertising on Twitter for the next week until the company gives more details about its plans to protect trust and safety on the platform, according to a source familiar with the matter.

IPG works with major advertisers like Coca-Cola, American Express, and Johnson & Johnson. The IPG recommendation to advertisers was first reported by Morning Brew.

Jason Calacanis, an angel investor and Musk confidant working on Twitter, on Monday said Twitter was having ‘a very productive day’ meeting with marketers and advertisers.

The advertiser meetings could help brands decide whether to stick around or abandon the platform because of divisive and vitriolic content.

Musk has attempted to reassure advertisers. ‘Twitter’s commitment to brand safety is unchanged,’ he tweeted on Monday. He previously said he would reverse Twitter’s ban on former US President Donald Trump, who was kicked off because of concerns he could incite further violence after the US Capitol riot last year.

Use of the n-word has increased by nearly 500% on Twitter, said the Network Contagion Research Institute on Friday, which identifies ‘cyber-social threats.’

Musk explained his plan for Twitter’s verified system on the social media platform itself.

‘Twitter’s current lords & peasants system for who has or doesn’t have a blue checkmark is bullshit,’ the new Chief Twit wrote. ‘Power to the people! Blue for $8/month.’

A blue tick badge allows other Twitter users to verify that other users are who they say they are.

Musk added that those who sign-up for the system will get ‘priority in replies, mentions, and search, which is essential to defeating spam/scam, ability to post long video and audio, half as many ads, and paywall bypass for publishers willing to work with us.’ 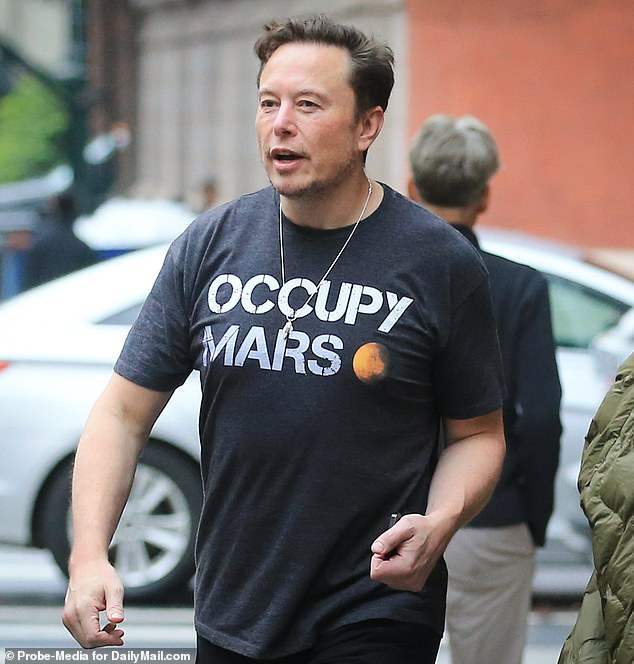 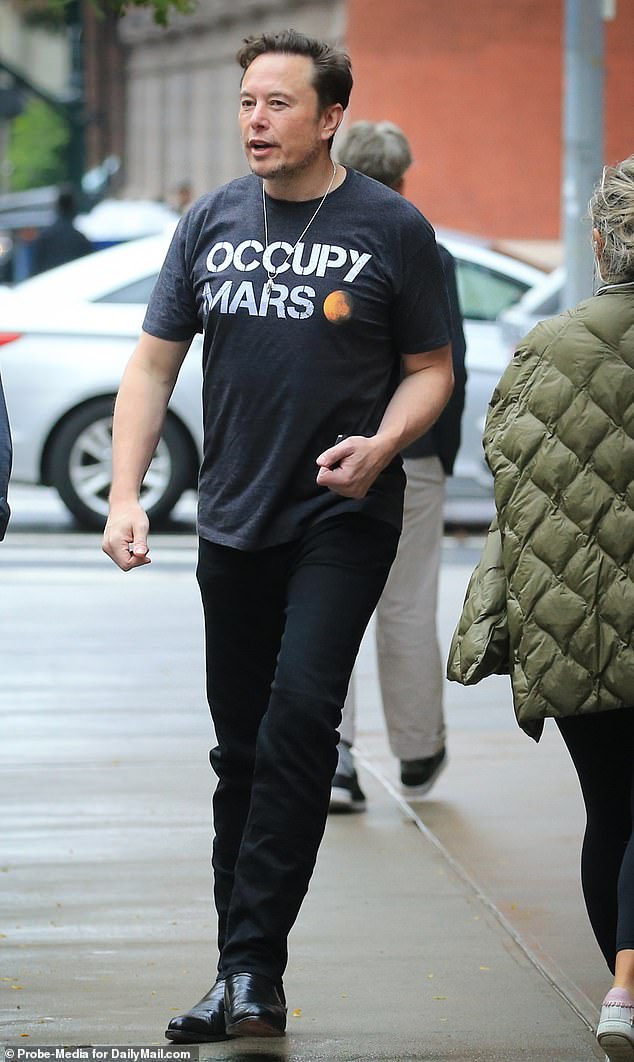 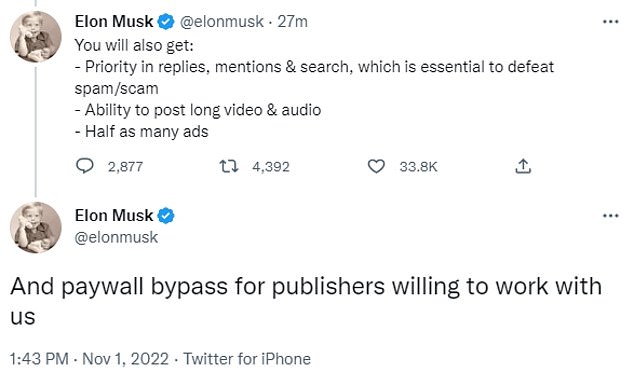 During his trip, Musk confirmed on Twitter that access to its verified program will go from being free to costing $8-a-month 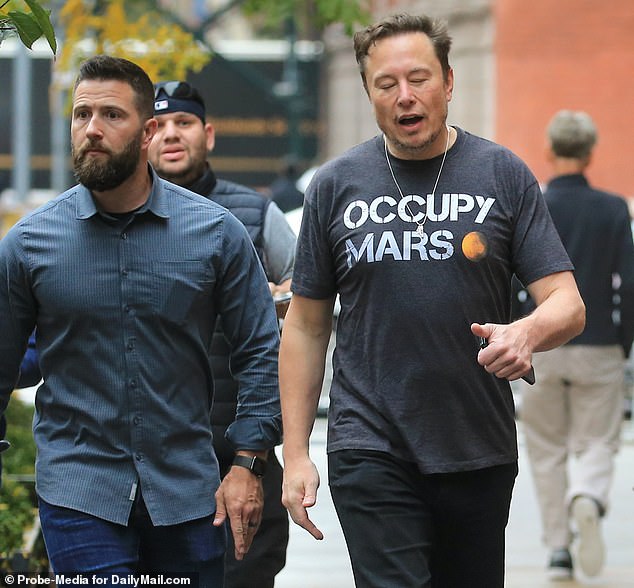 The decision came following backlash over his plans to start the subscription charge, with celebrities, including horror author Stephen King, among the vocal critics of a previously proposed $20-a-month charge 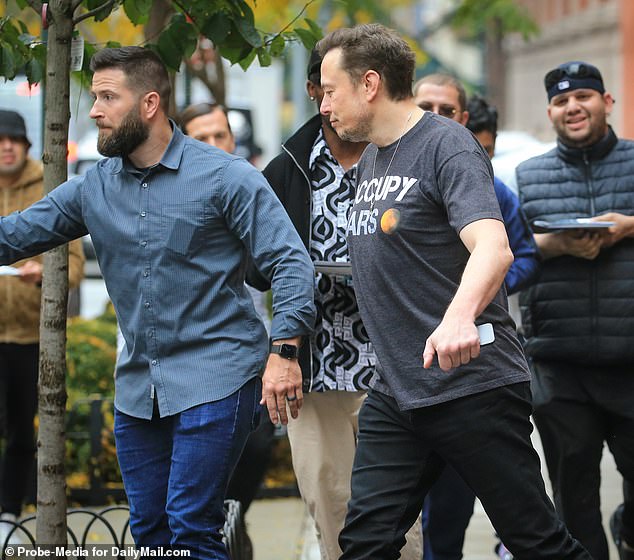 Pictured: Musk following his security detail on Tuesday as he entered the back of Twitter’s NYC headquarters 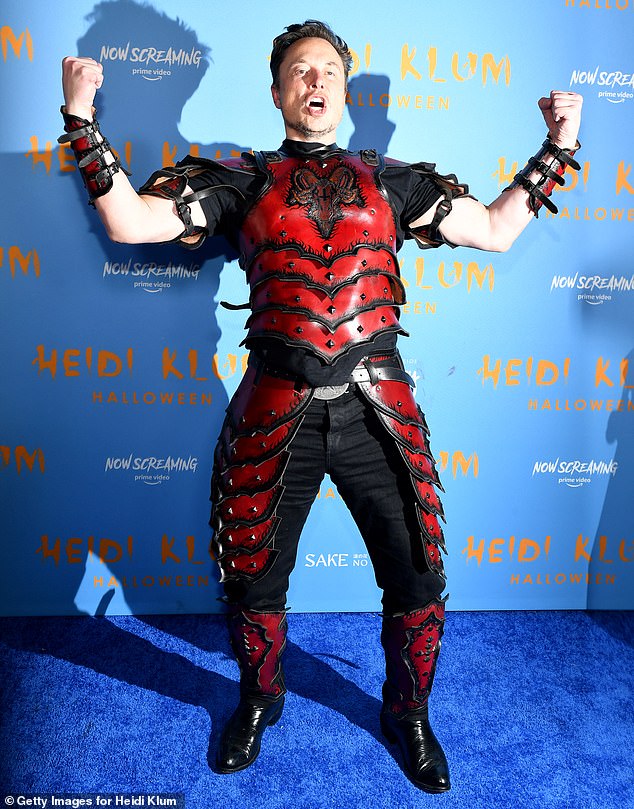 Musk is looking to make good on his promise to make the social media platform turn a profit by introducing a charge for Twitter users wanting to keep their verification badge.

His plan to reportedly charge $20 a month, however, appeared to sit poorly with King, who tweeted: ‘$20 a month to keep my blue check? F*** that, they should pay me,’ wrote King, who has 6.9million followers. ‘If that gets instituted, I’m gone like Enron.’

‘How about $8’ he asked, which appears to be the price he’s settled on.

King isn’t the only blue-tick Twitter user to threaten to abandon their blue ticks if a charge is introduced to the platform. 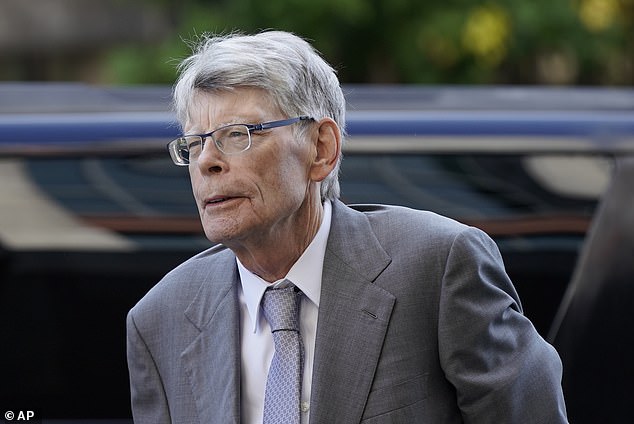 Author Stephen King, who wrote The Shining, said he will leave the platform if Musk introduces a blue-tick verification charge

Musk appeared to haggle with the horror author, suggesting the $8 price he ultimately decided on 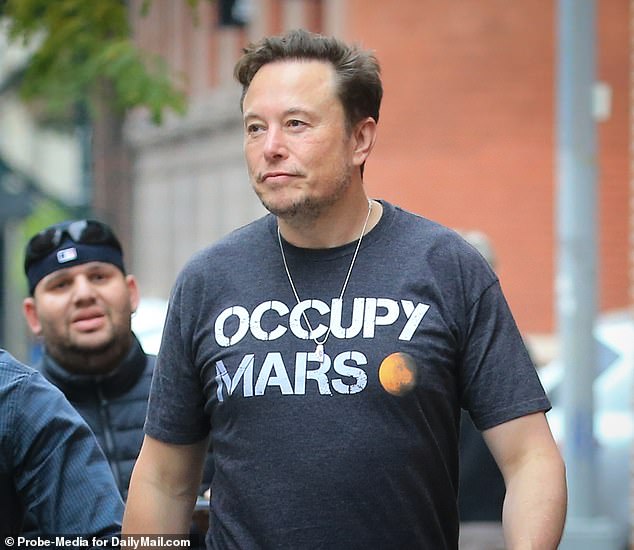 Musk is pictured leaving his mother’s house in New York City, wearing an ‘Occupy Mars’ branded t-shirt as he walked with his security detail

Musk appears to have taken Monday’s criticism from the public to heart as he opted to lower the proposed blue mark cost following his outing to Klum’s premier Halloween party.

The world’s richest man was pictured arriving at the party in a red Samurai-style costume as reports emerge that he is preparing to cut close to 2,000 Twitter jobs, amounting to around 25 percent of its workforce.

Musk looked triumphant as he posed on the red carpet in his armor, with his street clothes still visible underneath. It’s not clear what Musk was supposed to be dressed as for Klum’s celebration

According to the website for the high-end costume store, Abracadabra NYC, Musk’s outfit is the Devil’s Champion-Leather Armor set that retails for $7,500. At the time of writing, the website says that there is only one costume remaining in stock.

The billionaire’s mother, Maye, was also present at the party and inside Twitter’s offices on West 17th Street. 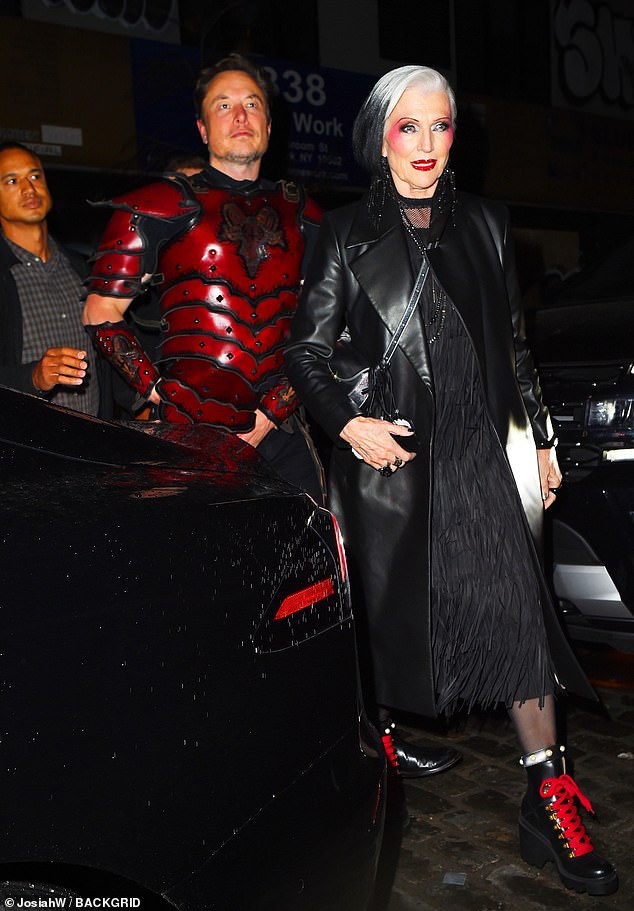 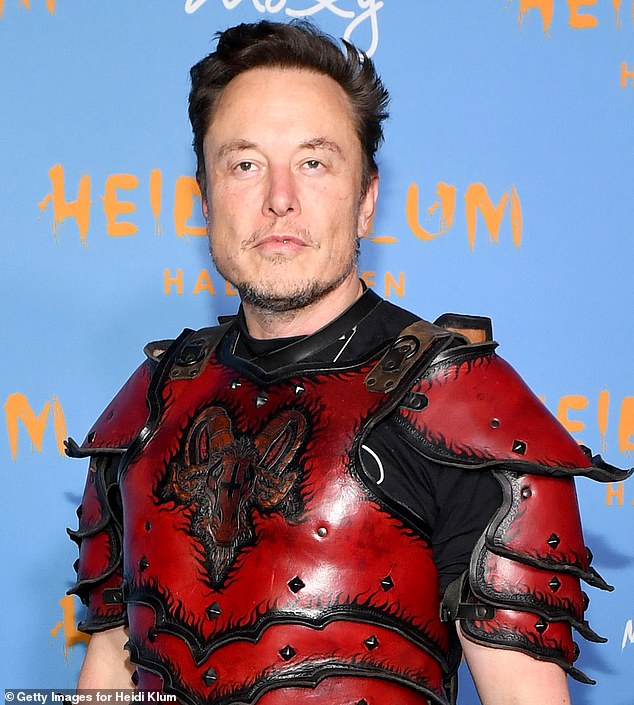 Days after Elon Musk took over Twitter and just before the midterms in America, the social media site has limited some content moderation tools.

It may hamper staff’s ability to stop misinformation, as they will not be able to manually change or punish accounts.

The change is the latest implemented by Musk and comes after he made significant staff cuts and fired the Twitter board, making himself the sole member.

Those working in Twitter’s Trust and Safety organization are currently unable to alter or punish accounts breaking the platform’s rules on misleading information, offensive posts and hate speech.

According to insiders on the matter, they can only penalize people making posts that violate Twitter rules to the extent of real-world harm, according to Bloomberg.

They added that the team were manually enforcing those posts. 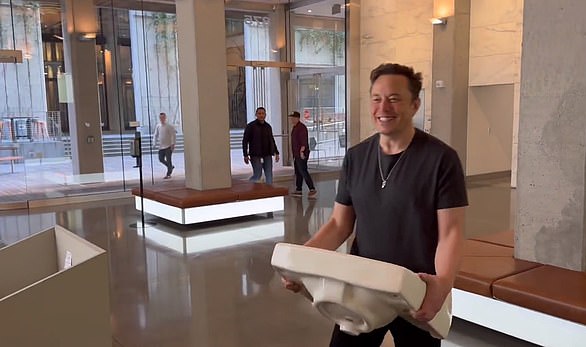 The change is the latest implemented by Musk, pictured at Twitter HQ, and comes after he made significant staff cuts and fired the Twitter board, making himself the sole member

At Twitter, staff have dashboards, called agent tools, in order to ban or suspend accounts that have breached policy.

However, only Twitter employees can remove or suspend accounts by using the dashboard.

But the tools have been out of use since last week, according to insiders.

It is alleged that this restriction has been put in place as Twitter transitions to Musk ownership in a bid to stop changes to the app being asked for by employees.

Sources at the company who asked to remain anonymous revealed that the high level of access to the tools given to employees has dropped from in the hundreds to just 15. 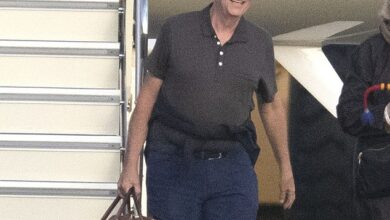 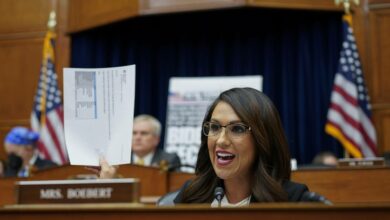 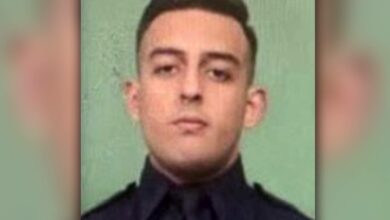 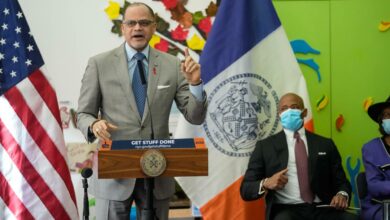 ABC’s Hard Quiz impresses in the ratings
10 mins ago

College student, 22, thanks God for being chosen to join Boston reparations task force
17 mins ago