The grieving parents of a 17-year-old boy who was killed after being squeezed between a car and a van in a horrific accident have shared their heartbreak.

Calvin Wijeweera was walking home from school in Carlingford, Sydney’s northwest at about 11:20 a.m. Thursday, when a car went off the road and slammed into the boys.

The silver Mitsubishi Lancer Sedan driven by a 90-year-old woman climbed the curb and crashed into a mechanic’s van in a home’s driveway — with Calvin trapped under the wreckage.

Emergency services rushed to Rembrandt Street, behind the Carlingford Court shopping centre, where they found the boy pinned under the car.

Unfortunately he could not be saved. 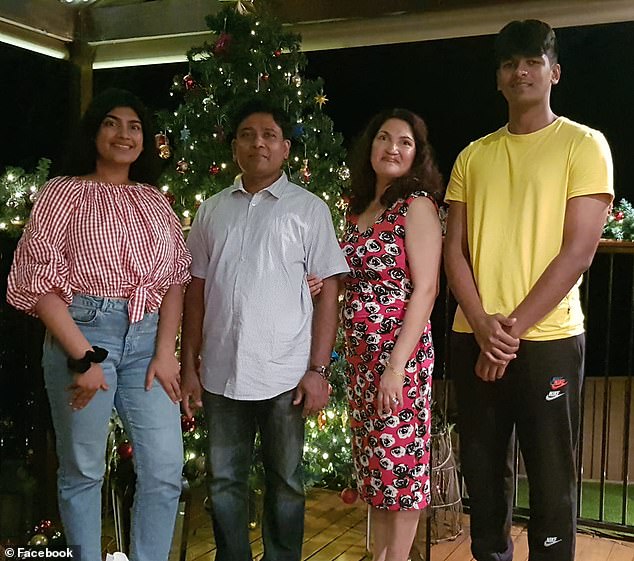 Calvin Wijeweera, 17, was killed after a car driven by a 90-year-old woman hit him and pinned him under a van (pictured from right to left: Calvin, his mother Anoma, his father Sandun and sister)

His devastated parents, Sandun and Anoma, visited the scene of the collision on Friday afternoon to mourn their son.

“I came here in Australia (from Sri Lanka) for a better life,” said Mr. Wijeweera The Daily Telegraph.

“It’s unbelievable that my son happened.”

The couple said their son excelled at math and loved football and volleyball.

The Colombo-born teenager, who was over six feet tall, was due to start his HSC next year and had ambitions to become an aeronautical engineer.

Calvin’s 72-year-old grandmother, who is visiting from abroad, was also seen distraught next to his parents at the scene of the accident.

The teenager has been described as a popular and active student of the Sinhalese language school in North Paramatta and is said to regularly participate in Sri Lankan events.

Friends, Carlingford High students, parents and teachers have paid tribute to the 17-year-old who laid bouquets of flowers at the scene of the crash.

One of Calvin’s classmates, also 17, was taken to Westmead Hospital after suffering a head injury in the crash, while a third boy managed to jump out of the way and was unharmed. 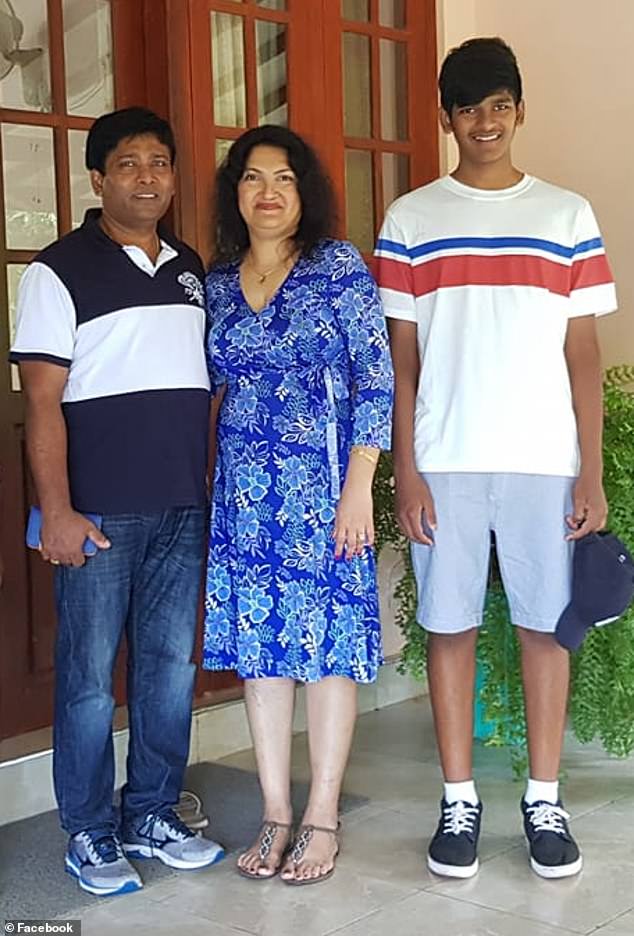 “It was very traumatic for the initial responding police officers and the ambulance that provided first aid to both 17-year-old boys,” Mr Hogan said.

“Unfortunately, a very, very tragic situation and at this time of year it will be very, very detrimental to the [boy’s] family and friends.’ 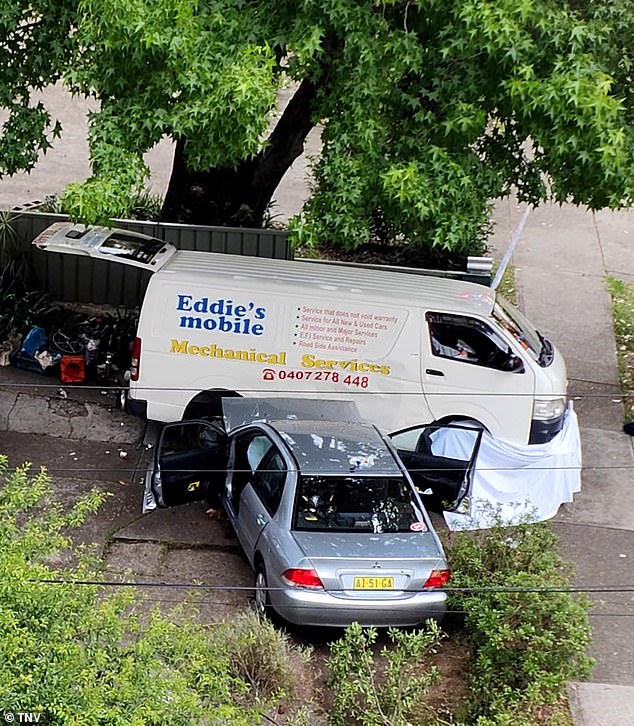 The Colombo-born teenager was walking home from school with his friends when a 90-year-old driver veered off the road, pulled up the curb and into a van parked in the driveway of a house on Rembrandt Street in Carlingford, Sydney’s northwest . (photo)

The saloon driver, a 90-year-old woman from Epping, suffered a leg injury and was taken to Westmead Hospital for mandatory testing.

Mr Hogan explained that test results would take several weeks and that the driver had yet to be interviewed.

Mr Hogan confirmed the investigation is ongoing and will look into several lines of inquiry, including speeding and whether the woman suffered a medical episode while driving.

“People of all ages drive in New South Wales and they all need to take responsibility for their driving and they drive according to the terms of their licences,” Mr Hogan said.

Police have heard several more key witnesses but have urged anyone who witnessed or has dashcam footage of the accident to contact Crime Stoppers. 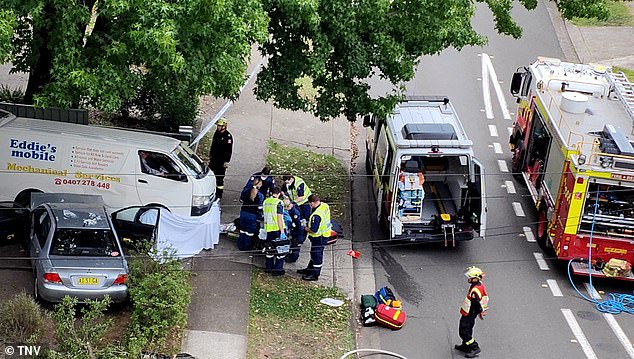 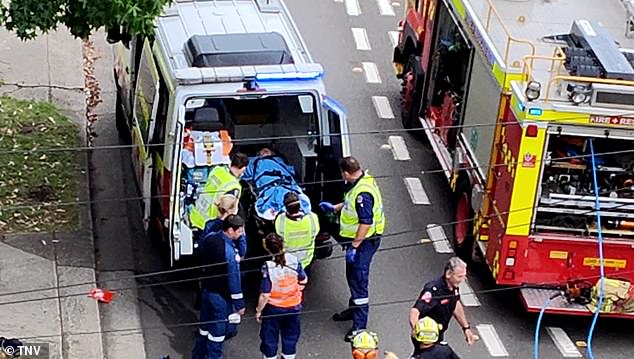 Footage taken at the scene shows the front of the silver car slamming into the side of the van, which is owned by mechanic Eddie Kilic.

A white sheet was seen tied to the front of the van the Mitsubishi crashed into, which appears to be parked in a ramp on the opposite side of the footpath.

The video also showed what appeared to be an elderly woman being carried into an ambulance before the van drove off under lights and sirens.

Mr Kilic was repairing a four wheel drive on site when the accident happened.

He and his son rushed to the aid of the woman and the boys – but Calvin, who was under his van, had already died.

Students rushed to help, but Mr Kilic said ‘there was nothing we could do’.

The NSW Department of Education said counseling is being offered to students and families after Calvin’s tragic death.

“We are deeply saddened by the death of a Carlingford High School student,” a spokesman said.

“Our thoughts are with the student’s family, friends and entire school community at this difficult time.

‘The school is in contact with the families. Welfare support is offered to students and staff, with extra supervisors deployed at school today and tomorrow.’ 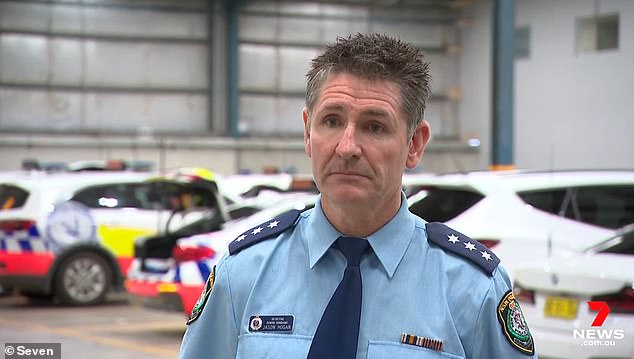 Acting NSW Police Inspector Jason Hogan (pictured) described the fatal crash as ‘distressing’ and confirmed an investigation into the cause of the accident is ongoing.

This Android bug could have caused the creation of new malware apps. 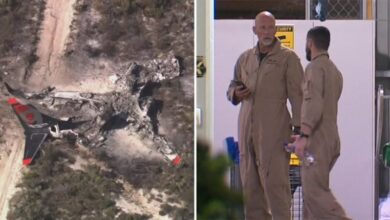 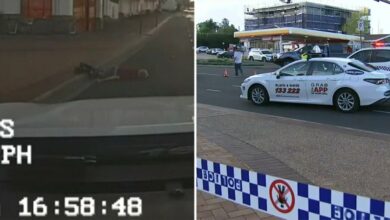 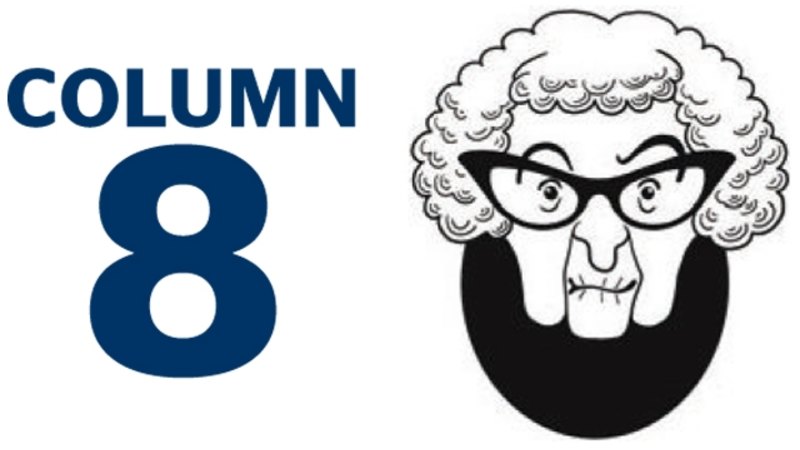 8 hours ago
Featured Posts
Building Skills and Confidence: The Benefits of Football Camps for Kids
10 mins ago

How to Choose the Best Online Casino Australia
12 mins ago