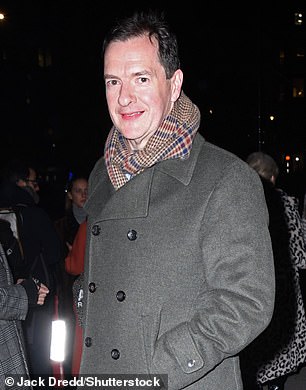 George Osborne, the chairman of the British Museum, is in top secret negotiations with the Greek Prime Minister over the transfer of the Elgin Marbles.

It is clear that the secret talks between the former finance minister and the Greek prime minister Kyriakos Mitsotakis about the relocation of the classical Greek masterpieces have been going on since November 2021.

The Elgin Marbles are currently on display in the British Museum, but the Greek government has been demanding their return since they were removed from Greece in the 19th century.

But after the revelations of the secret negotiations between Mr Osborne and Mr Mitsotakis, the ancient sculptures may eventually be removed from the British Museum and returned to Greece. 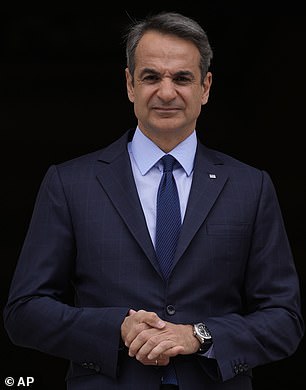 George Osborne (left), the president of the British Museum, conducts top secret negotiations with Greek Prime Minister Kyriakos Mitsotakis over the transfer of the Elgin Marbles 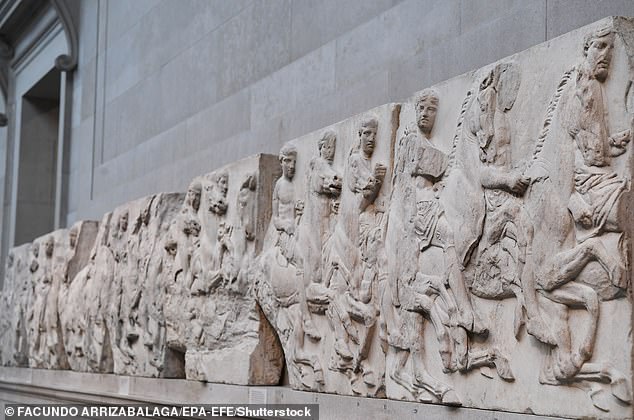 The UK government has agreed to UNESCO-backed talks on the repatriation of the Elgin Marbles, depicted in the British Museum, which could see the artifacts brought back to Greece and solve the long-standing problem

Consisting of 17 marble figures, the Elgin Marbles are part of a frieze that adorned the 2,500-year-old Parthenon temple on the Acropolis, created by sculptor Phidias.

The sculptures were taken by Lord Elgin in the early 19th century, when he was the British ambassador to the Ottoman Empire, and have since been the subject of a long-running dispute over where they should be displayed.

About 80 meters of the marbles are located in London, while Athens houses a smaller 50-meter section.

But the Greek Prime Minister wants the rest of the Elgin Marbles – or Parthenon Mables as they are known in Greece – returned home.

The Elgin Marbles (pictured) are a 17-figure collection of Classical Greek marble sculptures created by architect and sculptor Phidias, a Greek sculptor whose statue of Zeus, the god of the sky in ancient Greek mythology, was one of the Seven Wonders of the Ancient world 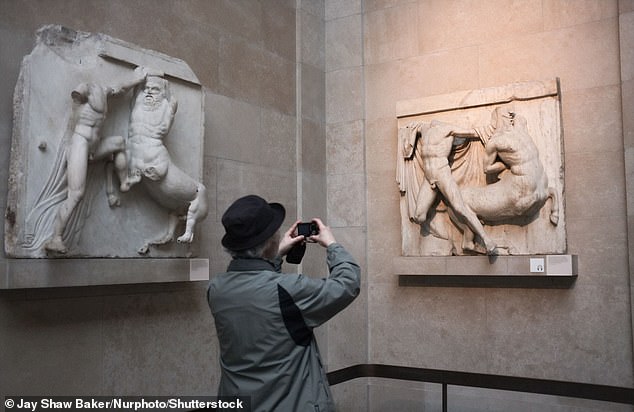 The Elgin Marbles were taken from the Parthenon in Athens between 1801 and 1812 by the then British Ambassador to the Ottoman Empire, Lord Elgin, and are now on display in the British Museum (pictured)

For some 13 months, Mr Osborne is said to have met the Greek Prime Minister and senior ministers of the Greek government on several occasions.

Greek newspaper Ta Nearevealed that two of the negotiations, including the very first in November 2021, took place at the residence of the Greek ambassador at 51 Upper Mayfair in Mayfair, London.

Mr Mitsotakis has long wanted the sculptures returned and has previously even offered to lend other Greek treasures to the British Museum in exchange.

Since the first talks in November 2021, Mr Osborne and Mr Mitsotakis, and other senior ministers of the Greek government, have met several times, in person in London and remotely via video calls.

Despite ongoing talks, no agreement has yet been reached.

But that is what a Greek source who was involved in the negotiations told us Ta Nea that ‘the devil is in the details’.

They added: “A deal is 90 percent complete, but a critical 10 percent remains unresolved. It’s hard to get there, but it’s not impossible.’

Mr Johnson said: ‘The British Government has long held a firm position on the sculptures, namely that they were legally acquired by Lord Elgin under the applicable laws of the time and have been legally owned by the Trustees of the British Museum since their acquisition. ‘

But now, following revelations of the dispute, the Elgin Marbles may not be housed in the British Museum for long.

A LONG RUNNING HISTORICAL DISPUTE: WHAT ARE THE ELGIN MARBLES?

The Elgin Marbles are a collection of classical Greek marble sculptures, inscriptions and architectural elements mostly created by Phidias and his assistants.

The 7th Earl of Elgin, Thomas Bruce, removed the Parthenon marble pieces from the Acropolis in Athens while serving as British Ambassador to the Ottoman Empire from 1799 to 1803.

In 1801, the count claimed to have obtained a permit from the Ottoman authorities to remove pieces from the Parthenon.

Since the Acropolis was still an Ottoman military fortress, Elgin needed permission to enter the site.

His agents then removed half of the remaining sculptures, as well as architectural members and sculptures from the Propylaea and Erechtheion.

The excavation and removal was completed in 1812 at a personal expense of approximately £70,000.

The sculptures were shipped to Britain, but in Greece the Scottish aristocrat was accused of looting and vandalism.

They were bought by the British government in 1816 and placed in the British Museum. They can still be seen in the purpose-built Duveen Gallery.

Greece has unsuccessfully sought their return of the British Museum over the years.

The authenticity of Elgin’s permission to remove the sculptures from the Parthenon has been widely disputed, especially since the original document has been lost. Many argue that it was not legal.

However, others argue that since the Ottomans had controlled Athens since 1460, their claims to the artifacts were legal and recognizable.

Jacky - January 27, 2023
As the Russia-Ukraine war enters its 338th day, we have a look at the primary advancements.Here is the circumstance as it bases on...