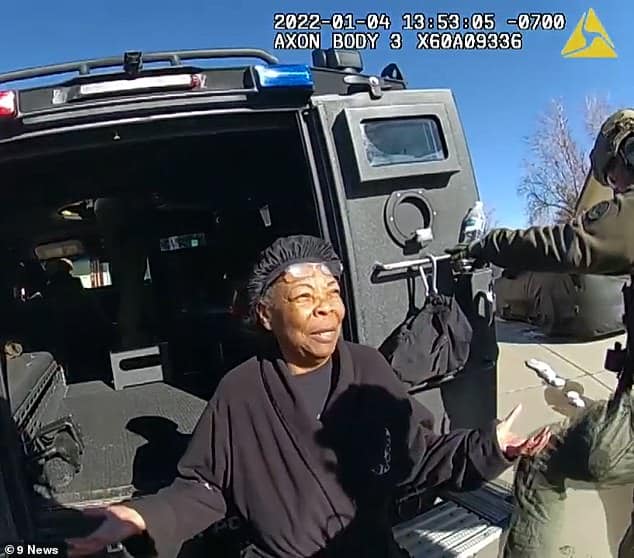 This is the shocking moment a SWAT team broke into the home of a 77-year-old grandmother after the ‘Find My’ app mistakenly showed a stolen iPhone 11 was there.

The harrowing video showed the former US Postal Service employee in a cap, slippers and gown standing next to a patrol car and surrounded by police officers in tactical gear.

But it later emerged that the detective leading the case had acted on a report from the ‘Find My’ app to track down the missing phone, which turned out to be incorrect.

It comes as Johnson filed a lawsuit for unspecified damages against the Denver Police Department following the terrifying raid.

She claims they used a ‘hastily prepared, basic, misleading affidavit’ to obtain the warrant for her house that has left her suffering from anxiety.

Ruby Johnson, 77, was ordered out of her home in January as police searched for stolen items near her home. 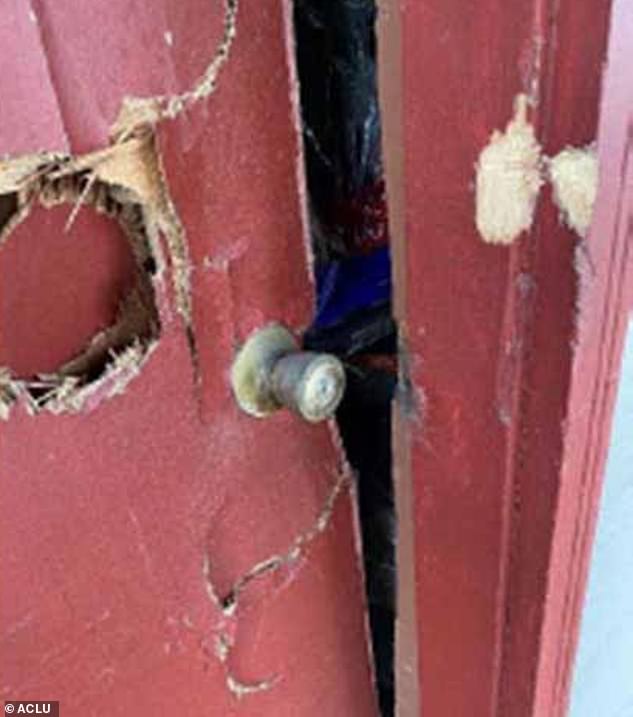 This photo shows doors that were broken down by police on the woman’s property.

The blue circle around the dropped pin shows that the phone was actually not located at the woman’s address, but in the vicinity of the location.

The clip, dated January 4, begins with Johnson being ordered out of his home by the team of eight SWAT officers using a megaphone.

‘If there’s someone inside… this is the Denver Police Department with a search warrant, can you come to the door with your hands up,’ an officer can be heard.

Dressed only in a gown, hat and slippers, she complied before officers lined her up outside the armored patrol car and questioned her.

She was asked if there was anyone else in the house or if she had “something on her that she wasn’t supposed to.”

She tells them no and that she was alone before being moved to the back of a police car to wait while her house is searched.

Officers broke down her door and searched the home for stolen weapons, the iPhone 11 and $4,000 in cash.

They are seen moving around the property, picking the lock on a shed in the backyard and breaking down a door in search of the stolen items.

The officers also ask the woman if she has any grandchildren who have recently visited her.

A lawsuit filed on Johnson’s behalf by the ACLU of Colorado alleges that Denver Police Detective Gary Staab used a “hastily prepared, basically misleading affidavit” to obtain a warrant.

Johnson is seeking a jury trial and unspecified damages. She is suing the detective in an individual capacity, according to the filing.

The woman’s legal team alleges that the police violated her right to ‘free from unreasonable searches and seizures’ and that the Denver police affidavit ‘lacked probable cause that evidence of crime could be found’.

The lawsuit states that the alleged misreading of the marked location has caused the elderly woman trauma that can never be undone. 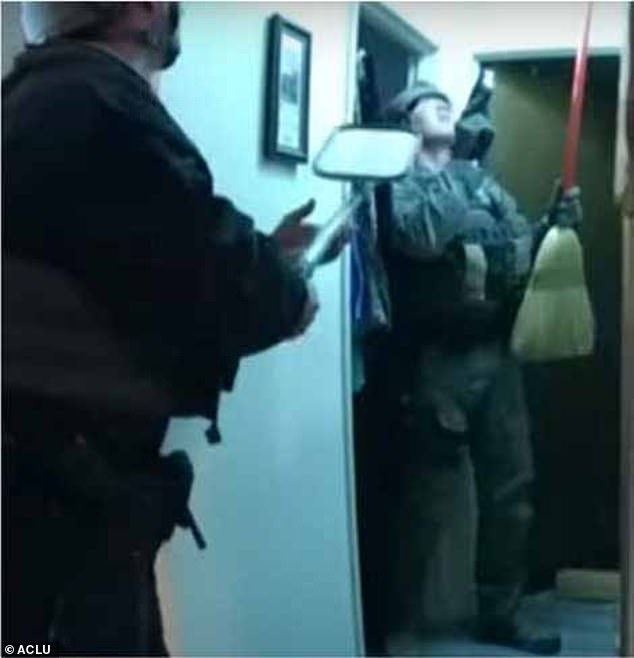 Police had the elderly woman sit outside in a police car while they searched her property for contraband, including a stolen iPhone, weapons and $4,000 in cash. 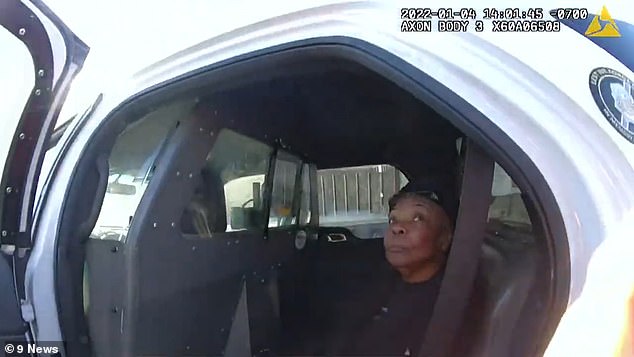 Johnson was forced to sit in the back of a police car while officers searched her home. 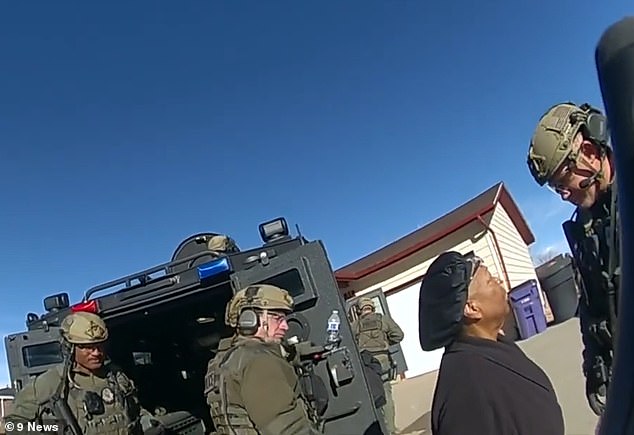 Officers, led by Detective Gary Staab, obtained a search warrant after using the tracked iPhone’s location to show the phone was in the home, despite the inaccurate reading.

Staab and the owner of the iPhone reportedly read the ping, shown as a blue pen surrounded by a circle, as a precise location.

But the presence of the blue circle means that the Apple product is close.

“Crucially, if a device’s location cannot be accurately determined, the user will see a blue circle around the device’s marker on the map,” Johnson’s lawyers wrote.

‘The size of the blue circle shows how accurately the location of the device can be determined. For example, the bigger the circle; the greater the inaccuracy,’ the filing reads.

Johnson and his legal team believe that Staab was able to obtain the search warrant after speaking with the owner of the stolen items. Jeremy McDaniel, who told her that he had used the Find My app, revealed that Johnson’s home was where his items were.

Actually, a screenshot of the app later showed a pinged proximity.

‘This blue circle covered an area encompassing at least six different properties and parts of four different blocks in the vicinity of [redacted] Street,” the ACLU said.

“The screenshot offered no basis to believe that McDaniel’s iPhone was likely inside Ms. Johnson’s home, rather than on any of several neighboring properties or dumped on a nearby street by a passing driver. ”, the lawsuit says.

Also, Staab allegedly insisted the items were inside Johnson’s home, even without the precise location, the filing alleges. 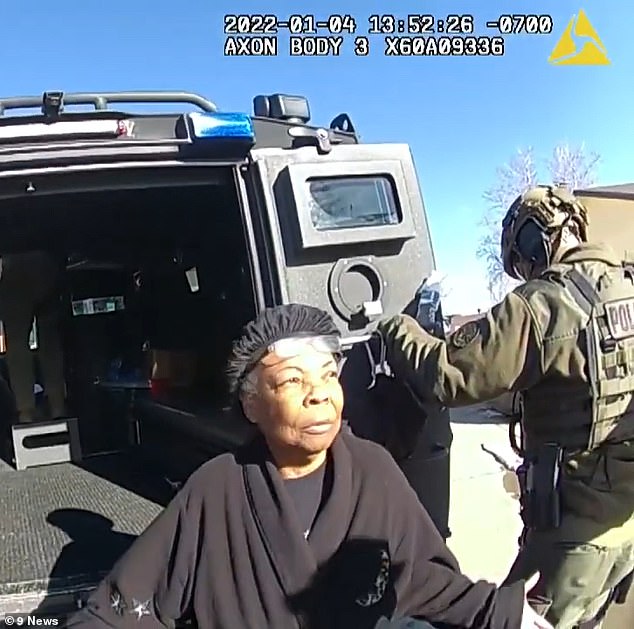 Johnson ‘experiences anxiety living alone in her home and is afraid to open the door,’ lawsuit says 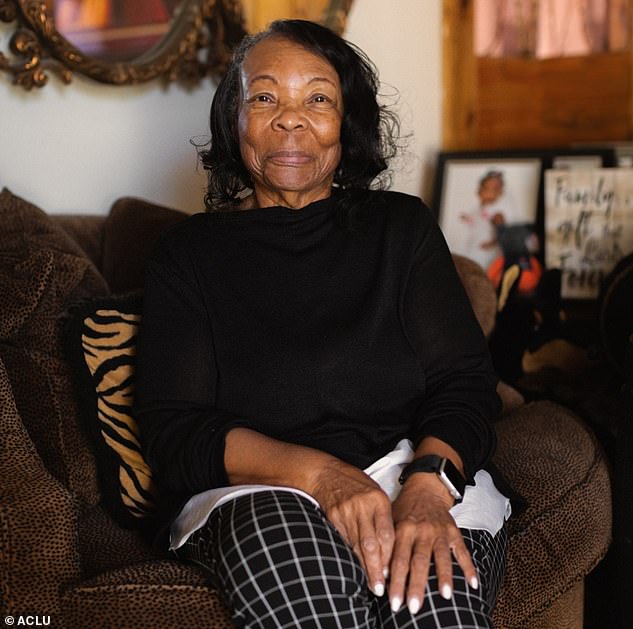 She’s still hurt. She still doesn’t understand why this happened to her. And after all, she still hasn’t even gotten an apology from the police,’ Johnson’s son said. 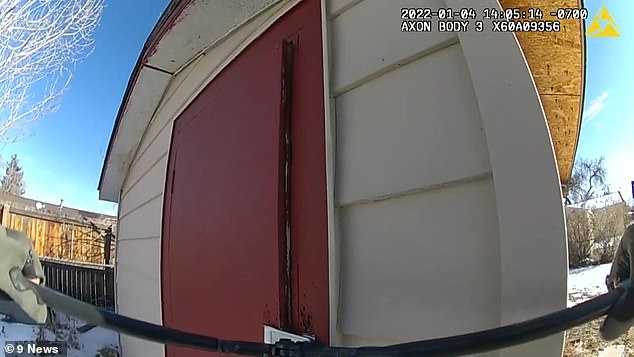 Footage then shows officers moving through his home and even cutting the lock on a shed in the backyard.

The lawyers also say the detective and his team did not work to independently verify that the items were inside, relying solely on the Find My ping information.

“Under the authority of the unlawfully issued warrant, Denver police arrived at the home of 77-year-old Ms. Johnson, where she lives alone, with an overwhelming and intimidating show of unnecessary force,” the ACLU said.

Now the 77-year-old man has been left traumatized by the incident, nearly a year after it occurred.

“Both Ms. Johnson and her household of 40 years have wounds from that day that have not healed.

Johnson no longer feels safe in her own home. She developed health problems due to the extreme stress and anxiety caused by the illegal search.

She also “couldn’t bear to stay at home” afterwards and had to briefly move in with her daughter before staying with her son in Texas for months.

Lawyers say she has since moved back to her home in Colorado, but is considering moving permanently.

johnson’she experiences anxiety living alone in her home and is afraid to open the door,” the lawsuit states. 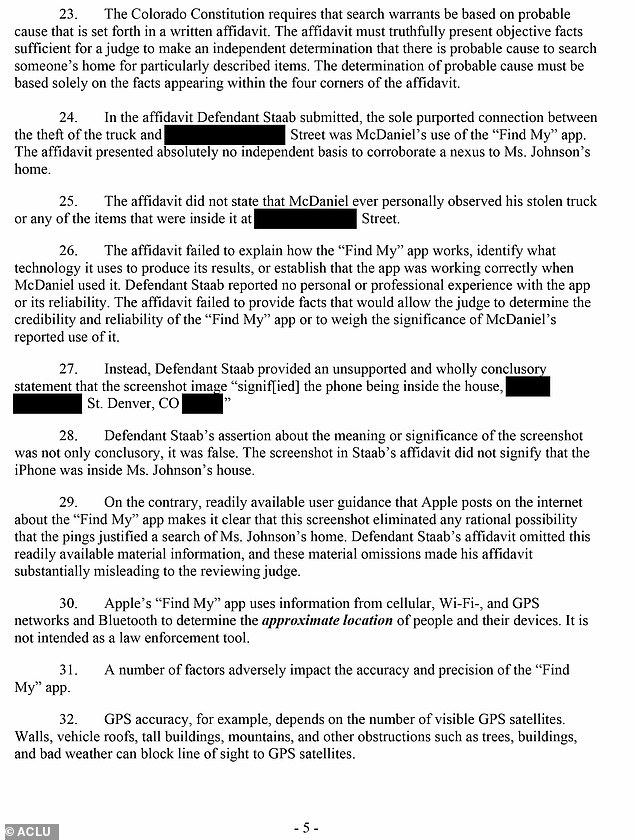 The woman’s legal team alleges that police violated her right to “free from unreasonable searches and seizures” and that the Denver police affidavit “lacked probable cause that evidence of the crime could be found.” 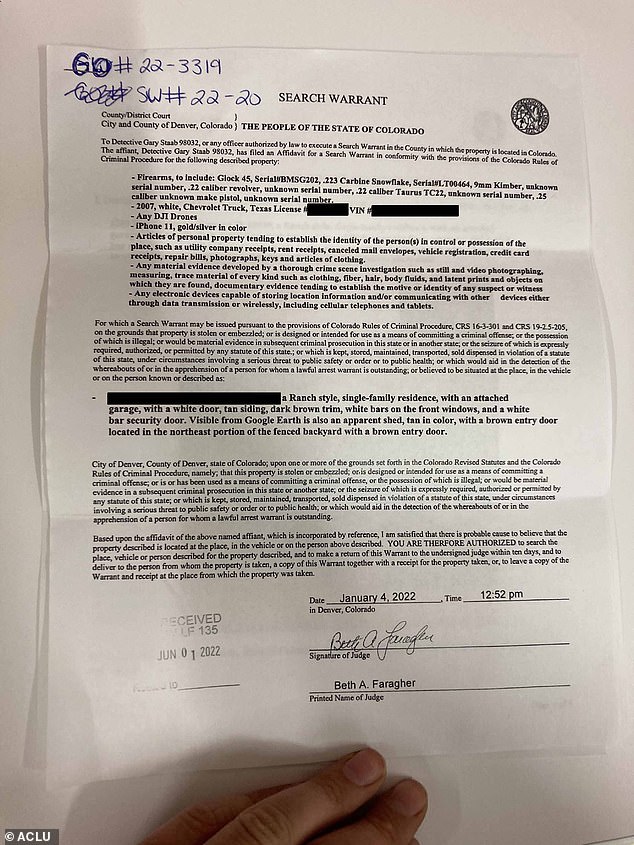 This is the warrant police received to search Johnson’s home

‘We appreciate mom. It is painful to see how this violation has affected her,” Ms Johnson’s son, Greg Brunson, said in a Press release.

She’s still hurt. She still doesn’t understand why this happened to her. And after all, she still hasn’t even gotten an apology from the police.

“For what we think is the egregiousness of the violation of rights, to inspire Denver to take a very serious look at how their detectives are seeking warrants,” said ACLU of Colorado legal director Mark Silverstein. FOX31.

At this time, Staab is the only defendant named in the lawsuit, but more could be added.

DailyMail.com reached out to Johnson’s lawyers for comment but did not receive a response by time of publication.

SWAT was involved in carrying out the warrant due to allegations that six weapons had been stolen and may have been located at Ms. Johnson’s home.

“Once Denver Police Chief Ron Thomas learned of the concerns expressed by Ms. Johnson’s family regarding the warrant, the Department reached out to the family.

‘We look forward to continuing to work with Ms Johnson’s family through their lawyers to resolve this matter without further litigation.

“Chief Thomas has also ordered an internal investigation to be opened and DPD is working with the Denver District Attorney’s office to develop additional training for officers and Assistant District Attorneys related to seeking warrants based on the applications.” find my phone.'”