Grazing in the steamy dampness of a prehistoric forest, the gentle giant must have felt a fraction too late that he was being pursued by a bloodthirsty rival. At 26 feet long—nearly twice the height of a London bus—and measuring 121 feet from nose to tail, the Patagotitan mayorum weighed a whopping 65 tons, which was as much as nine African bull elephants.

But even though his attacker, the deadly Tyrannotitan, was a third his size, the 60 sharp teeth in his powerful jaws could tear through flesh in seconds. Suddenly he jumped up and bit the tail of his prey.

During that almighty encounter between these heavyweights of the dinosaur world, it seemed that the Tyrannotitan’s herbivorous victim might have nibbled its last leaf, but it had a secret weapon in that immensely powerful, 16-foot-long tail.

As the air filled with terrifying growls and roars, it thrashed back and forth until the Tyrannotitan was finally knocked away, leaving its intended victim dripping with blood but surviving to graze for another day. 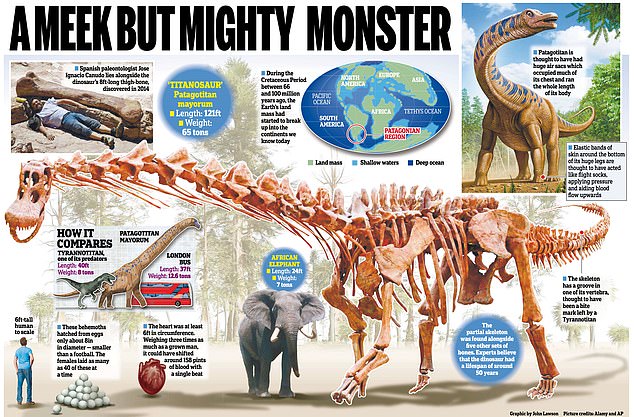 At 26 feet tall—almost twice the height of a London bus—and measuring 121 feet from nose to tail, the Patagotitan mayorum weighed a whopping 65 tons, which was as much as nine African bull elephants

Exactly when or how that Patagotitan, which was the largest of all known dinosaurs, finally died, we don’t know.

But now, some 100 million years later, a replica of his colossal skeleton is about to go on display at London’s Natural History Museum – complete with a dent in one of his vertebrae, believed to be a bite mark left by the Tyrannotitan.

The largest known creature to have walked our planet dwarfs the museum’s other mammoth attractions – it’s more than four times heavier than Dippy the Diplodocus and 40 feet longer than Hope, the blue whale.

The exhibit, which opens in March, also features the skull of a Tyrannotitan, the creature believed to have attacked the Patagotitan.

Of course we can’t be sure of this, but it seems like the most likely contender in the hostile primordial environment they both lived in.

They lived during the Cretaceous Period between 66 and 100 million years ago in a region corresponding to modern-day Argentina.

The story of the remarkable skeleton that came to the Natural History Museum began in 2014 when an Argentine Shepherd searching for a lost member of his herd came across a huge femur sticking out of the earth.

At 8 ft tall, this cartoonishly large femur looked like something out of The Flintstones.

The scientific name of this new species was inspired by the region where it was discovered, Patagonia, and its strength and great size, the Titans are the powerful Greek gods said to have reigned before the Olympians.

Over the next two years, another 200 bones were discovered, proving that at least six of these giants had died in what was once a river floodplain.

The growth marks on the bones, which can be read like the rings on trees, suggested these were young adults in their teens or early twenties. It is not clear whether they were men or women.

Since none of the skeletons were complete, the paleontologists used fiberglass replicas of the bones to construct a composite skeleton so large it had to be assembled in a cavernous storehouse.

While the original fossils remain in Argentina, the demand from museums around the world to display replicas has been such that several copies of the skeleton have been made. 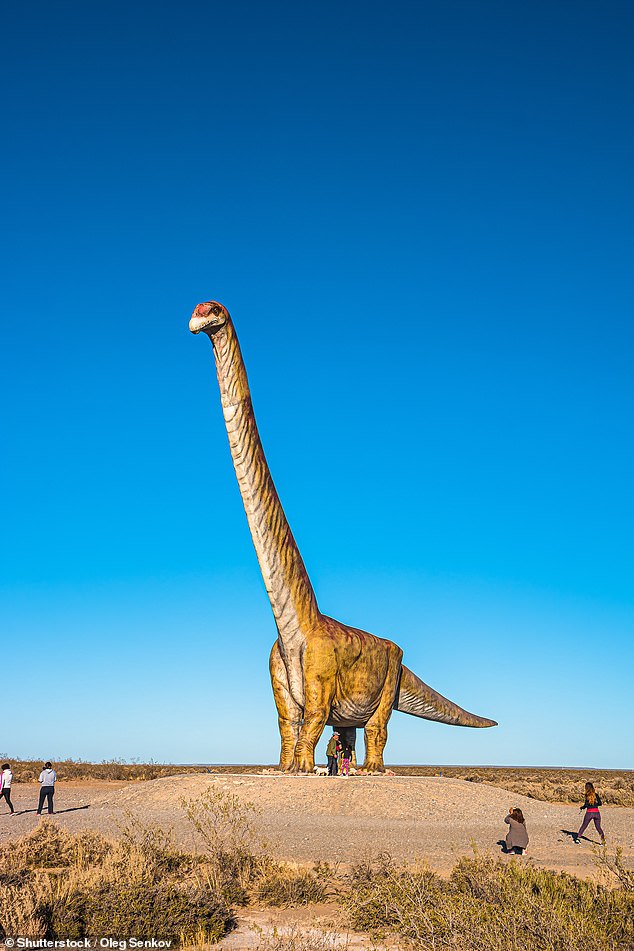 Exactly when or how that Patagotitan, which was the largest of all known dinosaurs, finally died, we don’t know. In the photo: life-size model in Patagonia

When the Patagotitan makes its European debut next year, it will barely fit in the Natural History Museum’s Waterson Gallery, despite its 30-foot ceilings. In fact, the skeleton is so large that visitors can walk under it.

“You don’t get to the ankles until you’re standing next to it,” says Professor Barrett. “This is an animal that really towers over you and it’s pretty humble.”

The dimensions of its bones were critical in estimating Patagotitan’s size and weight, suggesting that it had reached the upper limit of how large land animals can get before their skeletons can no longer support them.

Incredibly, these behemoths hatched from eggs that were only about 8 inches in diameter — smaller than a football.

The females laid as many as 40 at a time to increase the chance that at least some of them would survive, likely using decaying leaves to aid in incubation. Once hatched, the offspring were highly vulnerable to predators, including the pterosaurs, terrifying flying reptiles with enormous wingspans that scoured the ground for prey to surface and devour.

Aside from these and the Tyrannotitans, these youngsters would also have lived in fear of the Giganotosaurus, ten-ton carnivores that bared eight-inch-long teeth, walked on two legs, and could run at 30 mph—much faster than the Patogotitan’s stately 5 mph. on all fours.

To avoid detection, their scaly crocodile-like skin was likely brown or gray. “We can’t know for sure, but if you think about the largest terrestrial animals out there today, like elephants, they tend to have dull colours, which makes them blend into the landscape like a form of camouflage,” says Professor Barrett . .

As the Patatogitans grew older, predators would have been intimidated by their sheer size and the fact that they roamed in herds.

They also enjoyed a lofty vantage point of the world. Stretching a mind-boggling 45 feet, their necks were eight times longer than the average giraffe’s and made up of 15 huge vertebrae, some six or seven times longer than they were wide. And with eyes the size of tennis balls in their tiny heads, they could see potential attackers coming, even if they couldn’t do much damage with their tiny pin-like teeth.

This suggests they were fairly well-mannered eaters – taking small bites rather than tearing up vegetation. Still, they ingested about 200 pounds of food a day, and while they ate from conifers and ancient relatives of monkey puzzle trees, they could also reach down to eat the ferns that predominated before grasslands developed.

Because this diet was very fibrous, their guts would have been extremely long, taking up to ten days for food to digest and pass through. As it fermented in their massive stomachs, massive amounts of methane would have been produced as a by-product. 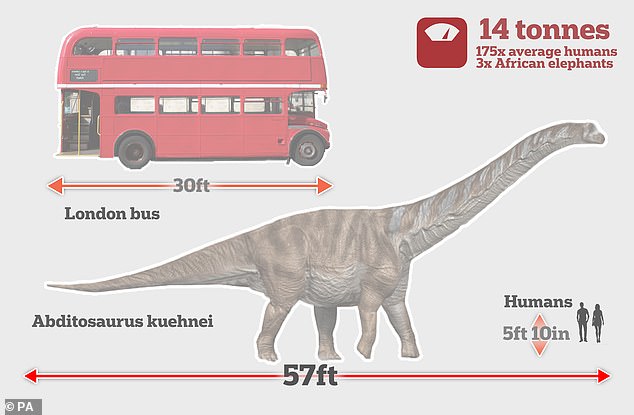 The dimensions of its bones were critical in estimating Patagotitan’s size and weight, suggesting it reached the upper limit of how large land animals can get before their skeletons can no longer support them.

“I strongly suspect that the rear of a Patagotitan herd was not the place you would want to be,” says Professor Barrett.

Their long stomachs were just one of many extraordinary biological adaptations that helped the Patagotitans survive.

Essentially the size of moves, one of their biggest challenges was getting oxygenated blood pumped through their massive bodies. To accomplish this, the Patago titans needed hearts at least six feet in circumference. Weighing three times as much as an adult man, these could have moved about 158 ​​liters of blood in a single stroke.

As with some birds, the dinosaur’s closest relatives, it is believed that the Patago titans’ breathing was also aided by huge air sacs that took up much of their chest and ran the entire length of their bodies, from the tailbone up through the very long neck to the head.

Connected to their lungs, these helped them take in oxygen continuously, both on inhalation and exhalation.

To reduce that weight, their bones were full of holes – just like a Swiss cheese. And as they stumbled on all fours, their huge, columnar legs spread out a little to support their masses. Markings on their femurs where the muscles were attached suggest that their back legs were connected to their tails, raising the hindquarters and forward to propel the Patago titans.

These strange and wonderful marvels of physique are thought to have had a lifespan of about 50 years.

There’s one question the Natural History Museum’s exhibit can’t answer: Why did the boy found near that watering hole die prematurely? Some experts have suggested that they became isolated from their group and died of stress and starvation; others that a volcanic eruption covered the surrounding vegetation, causing them to starve.

While we’re lucky to never encounter a Tyrannotitan or a Gigantosaurus, the forthcoming London exhibit will certainly bring us one step closer to imagining what it was like when creatures like the massive but meek Patagotitan roamed the earth.

Australia Post package deadlines: Why you need to get that Christmas present in the mail NOW

Peace in our (tee) time? It’s all in Greg Norman’s mind 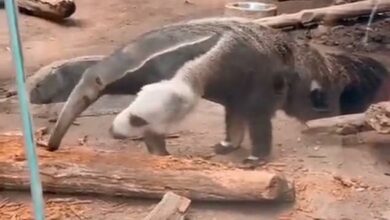 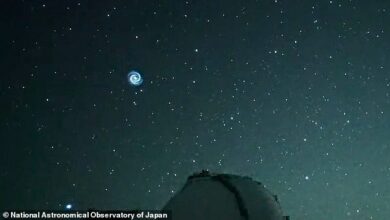